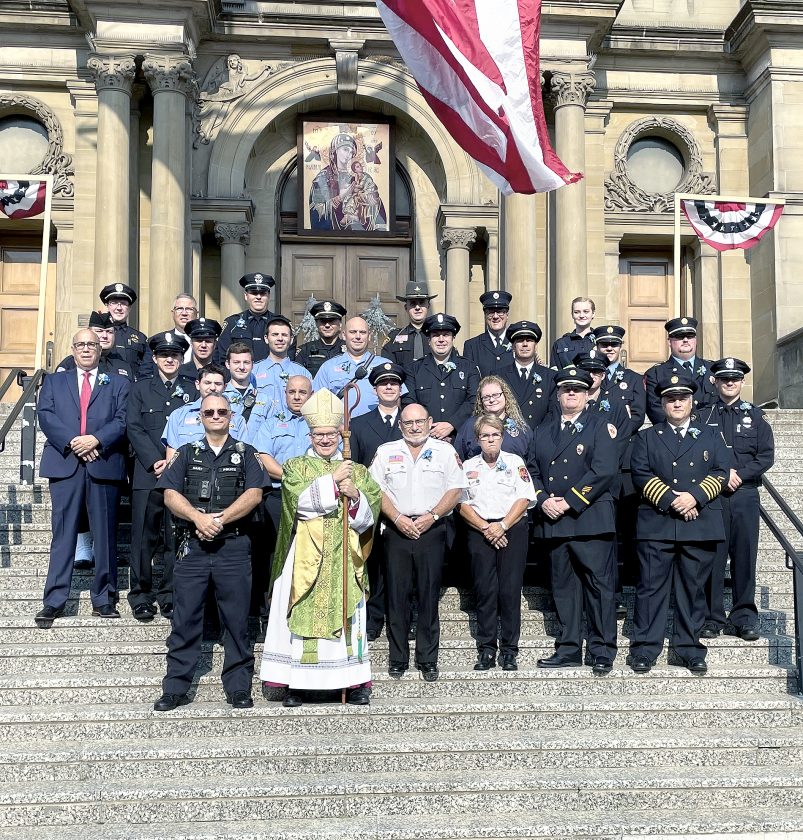 STEUBENVILLE — Area first responders gathered Sunday for their annual Blue Mass, a chance to remember those who gave their lives in service to others and to offer prayers of thanksgiving for the safety of those currently serving.

The tradition, which dates to the mid-1930s, is a chance for communities across the nation to show gratitude to first responders and their families.

Bishop Jeffrey Monforton told the crowd assembled at St. Peters Church that, especially on the 20th anniversary of the 9/11 terror attacks, people have a tendency to dwell on where they were that day.

“But we know where a lot of people were in New York,” he said. “They were running into the towers, trying to save people and never coming out alive,” he said.

Monforton spoke of God’s plan, telling the group that “humanity has a bright future. This is God’s plan. You and I are part of it, regardless of Christian vocation, here in this world, even at times (when) we feel we have failed. Welcome to the human race!”

He told them faithfulness, not notoriety, is what’s important.

“Just by being here in this sacred place, you and I are making a difference, praying for others as well as ourselves,” he said. “We’re here by the grace of God to enable others to be saved. How do we step up like our first responders, like those of 9/11, how do we step up to assist others? We do so first by living our own lives as saints. living our lives as best we can by the grace of God, by striving our best. Regardless of our vocation in this world, we all know it takes hard work.”

Prior to the bishop’s homily, a processional led by officers and children carried three candles, a flag, flowers, police hat, a fire helmet, an EMT helmet and a board with the names of 9/11 victims to the altar, and the names of the first responders who have died in the line of duty were read:

Sponsoring this year’s Blue Mass, which included a reception afterwards and gifts for each of the first responders, were M&M Hardware, J.K. Auto Glass, Nelson’s of Steubenville, Catholic Women’s Club, McCauslen’s Florist, and Rick Hicks. Tim Pierce of Pierce Media also provided services, and Derek Sullivan, an East Liverpool resident, played the bagpipes as the first responders and their families emerged from their church.

The event was coordinated by Patrolman Eric Hart and his wife, Alexandra.

Runners, walkers warmed up for holiday by helping others – The Steubenville Herald-Star