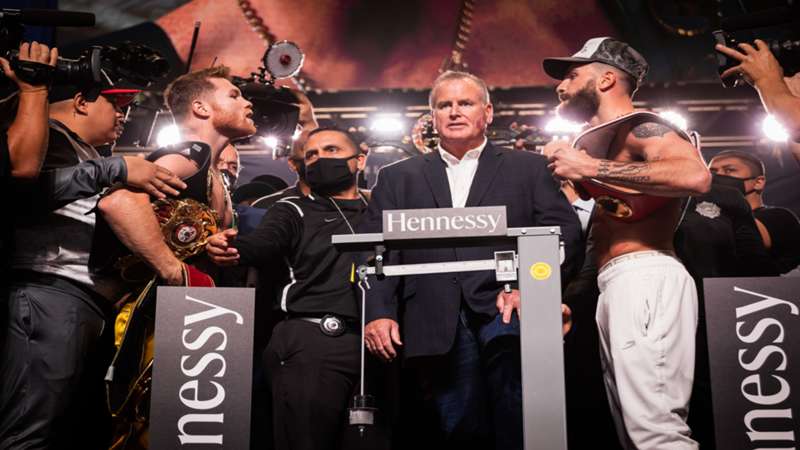 Who becomes the first, four-belt undisputed champion in the super-middleweight division: Canelo Alvarez or Caleb Plant?

LAS VEGAS — The animosity Canelo Alvarez and Caleb Plant have toward one another has reached a boiling point, as evidenced by their heated confrontation at Friday’s weigh-in.

Alvarez and Plant get to take their frustration out on one another as they square off on Saturday from the MGM Grand Garden Arena. The winner becomes the undisputed super-middleweight champion and the first to accomplish the feat in the four-belt era.

It has been a fever pitch since a press conference in September when Alvarez pushed Plant due to comments the latter made in accusing the Mexican star of being a cheater. The Tennessee native didn’t take the shove lightly as he came back and swung at Alvarez, who retaliated with punches of his own.

Plant reached this destination by earning the most significant win of his career when he defeated José Uzcátegui to capture the IBF strap in January 2019. He’s successfully defended the belt against Mike Lee, Vincent Feigenbutz, and Caleb Traux to earn a crack at the best fighter in the sport and a chance to make history.

DAZN News will be inside the MGM Grand Garden Arena, giving you all the latest happenings with live coverage starting at 9 p.m. ET.

The Canelo vs. Plant fight will not air on DAZN. However, The DAZN Boxing Show will be in Las Vegas during fight week for live episodes, exclusive interviews and more.

Also, the DAZN News website will bring you all the live text updates and results from Canelo-Plant at the MGM Grand Garden Arena on Saturday night.

Just when it seemed that Romero was gaining momentum, Rodriguez came back in the fourth round. He started connecting upstairs. He blasted Romero with two left uppercuts to stun him. Another uppercut sent Romero to the ropes and a right sends him to the canvas. He makes it back up. Rodriguez tried to pour it on but Romero survived. A huge round for Rodriguez.

Slugfest in the second

Rodriguez and Romero duking it out in the second. They are winging shots looking for KO. Romero’s punches had a bit more of an effect and are landing at a higher rate.

The opening main card bout of Canelo vs. Plant features Elvis Rodriguez (11-1-1, 10 KOs) taking on Juan Pablo Romero (14-0, 9 KOs) in a super lightweight affair. Should be an exciting fight to kick things off.

Welcome to DAZN News’ live coverage of the undisputed super-middleweight title clash between Canelo Alvarez and Caleb Plant. We’ll be inside the MGM Grand Garden Arena so stay locked in and enjoy what is going to be a historic night.