There was much talk around the CFL when the Toronto Argonauts landed free agents Juwan Brescacin and DaVaris Daniels. When Eric Rogers was acquired from Calgary there was discussion about how deep the Argos were getting at receiver. The signing of Martavis Bryant generated a ton of talk on both sides of the border.

There was much less fanfare when Terrell Sinkfield Jr. signed at the beginning of February. The native of Minnetonka, Minnesota had bounced around the NFL for the last couple of seasons but is thrilled to be back in the city where he started his CFL career in 2014.

“This is a blessing,” he told Argonauts.ca after Monday’s practice. “I’m happy to be here.”

So are the Argos.

Sinkfield played just five games in Double Blue before he was released and then committed the ultimate sin, signing with the Hamilton Tiger-Cats, where he would post a 1,030-yard season in 2016.

Needless to say, he loved playing in games between the two teams.

“It’s a great rivalry. I love the games that these two teams produce and I’m glad we’ve got them four times this year. It should be fun.”

It should also be enjoyable for the coaching staff trying to figure out where Sinkfield fits in. There is a ton of depth at the receiver position, with 15 players currently dressed, and six others either on the suspended list, or finishing up their quarantine period after crossing the border.

“Sink looks good,” he told Argonauts.ca after Monday’s practice. “We brought him in to be a returner and add to our offence. He’s a really good guy once he gets the ball. He made a really good play over the middle today. He’s picking up the offence and doing the things we want to do. I’ve just got to be creative and make sure we get him some touches and get him in space and let him do what he does.” 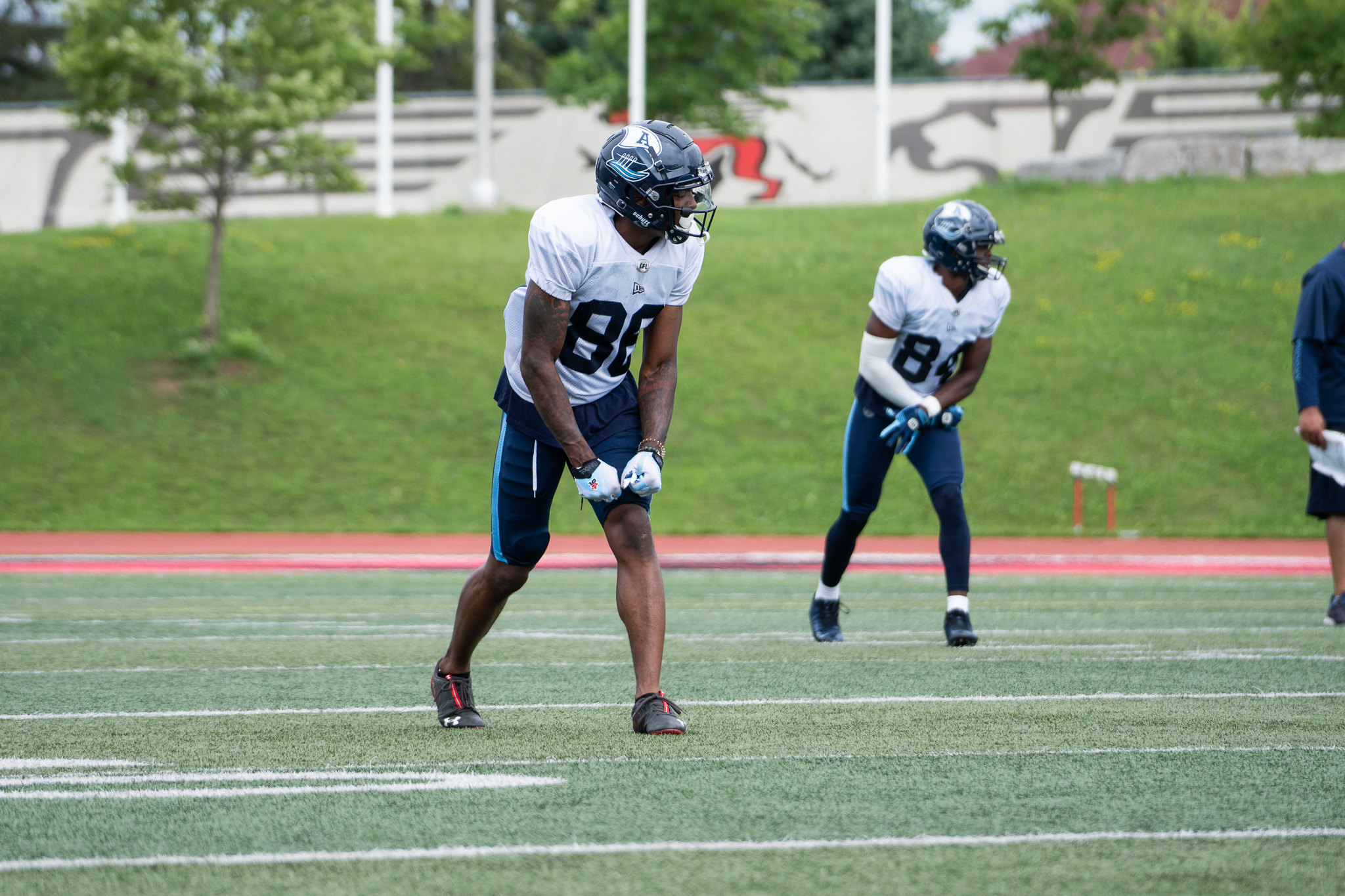 Dinwiddie says that having a guy with Sinkfield’s experience and ability allows the staff to move him around.

“I think we’re going to line him up all over the field. I told him to be ready to know all the positions. We told him we’re going to find ways to be creative with him and we’ve got to have him touch the ball at least five or six times a game on offence.”

That sits well with Sinkfield, who was used that way by the Ticats.

“I’ll try to make plays anywhere they put me” said Sinkfield, who is wearing No. 86 in camp. “In past years with Hamilton they put me all over the place, whether it be inside, outside, returner, offence, defence, running back.”

While he played receiver and returner in the CFL, he was a defensive back when he was in the NFL. It’s that kind of ability and versatility that makes him one of the more intriguing players to watch throughout camp.

“The defence had a hell of a day today.” Those were the words of Dinwiddie, addressing his team following practice. He was right, though it wasn’t that the offence looked out of sorts as it looked much crisper than it did on Sunday. It was just that all three levels on defence were flying around.

Defensive end Shane Ray showed why he was a first-round NFL pick. He was dominant in one-on-one drills against the offensive line. This was his first day on the field after completing his quarantine upon entering the country. There is little to no doubt that the Argos will be loaded this year with players who can get after the quarterback. 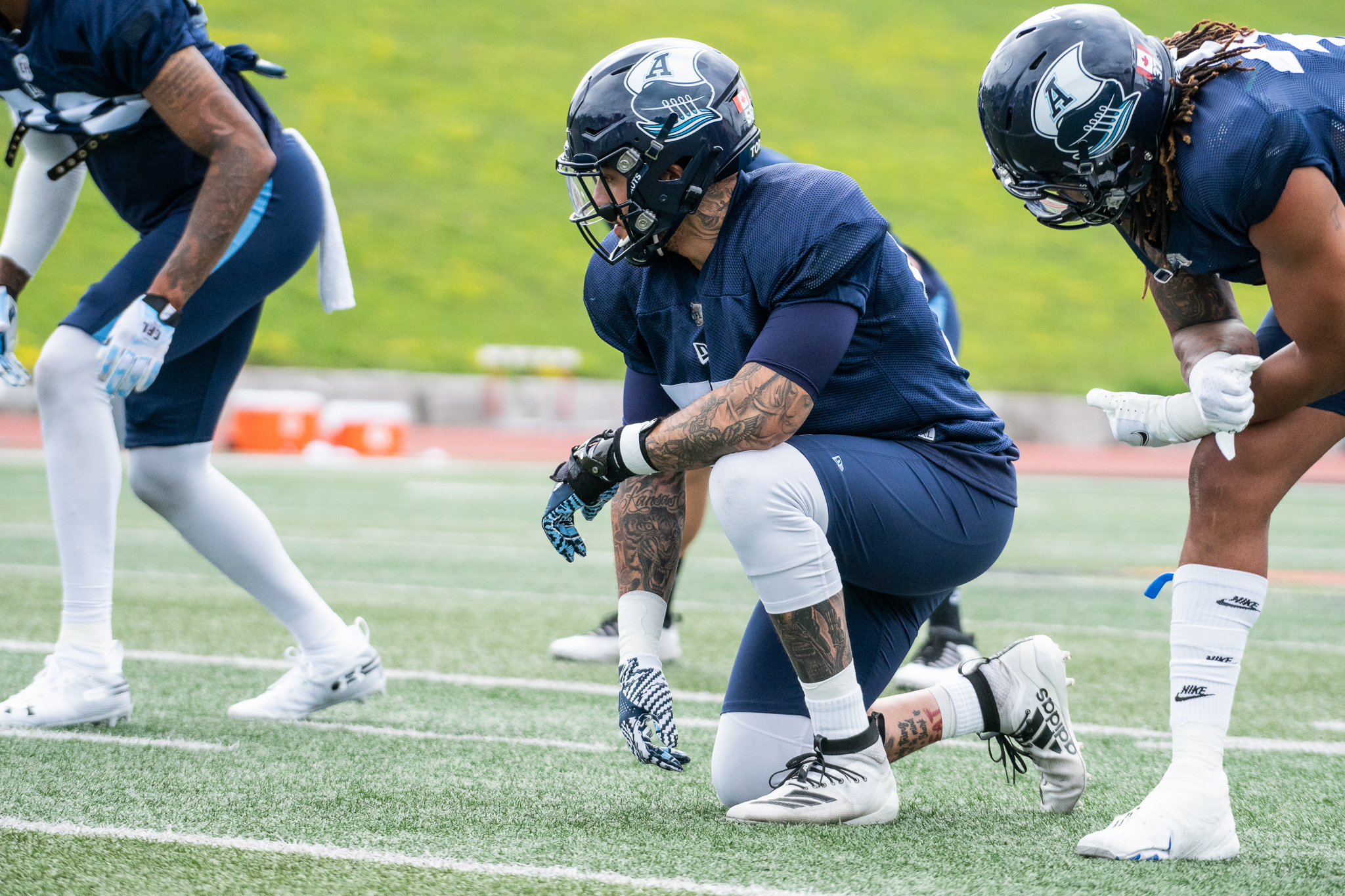 Boris Bede worked with holder McLeod Bethel-Thompson as the first field goal unit. Toshiki Sato worked with Antonio Pipkin. Jake Reinhart is back as the long snapper, while Sam Baker has also worked in that role.

Edmonton Fullback Calvin McCarty retired in the elongated off-season, meaning that Declan Cross is among those with the most CFL seniority at that position. He had a blunt answer when he was asked if his goal was to become the league’s pre-eminent fullback.

It’s not like he needed help to stand out on the field, but 6’8” defensive lineman Shawn Oakman is easy to spot as he’s wearing one blue, and one orange shoe. He returned a fumble for a touchdown in one of the group sessions.

Nick Arbuckle was asked how excited he is to be back on the field and came out with a strong statement about how close the team has become already.

“It’s been just the best feeling in the world getting back out here with everybody,” he told reporters. “You really missed it and you want to be a part of the team and playing football again, but you don’t realize how much you missed it and how much it means to you until you get back to doing it again. It’s not even the practices. Being on the field is one thing, but the camaraderie of being in the locker room, being at lunch with people and getting to know people’s stories. We have a great team, there are so many talented players, but this is the best locker room environment that I’ve been a part of in my years of playing.”

Perhaps the best deep throw of the day was from Bethel-Thompson to Llevi Noel in tight coverage, a frozen rope 45 yards downfield that hit the receiver in full stride went for a touchdown.

Bethel-Thompson had the most unexpected response of the media gathering. When asked what his philosophy was going into this season with some of the things he’s experienced in the last year and a half, including becoming a father for the first time.

“Socrates said ‘The secret to change is not fighting the old but building the new’. I know that I’m a new person this day and that’s what I’m focused on. I’m excited for my future. I’m throwing the ball better. I’m seeing the game better and I’m focused on getting better every day. When I meet my future self, that’s my true self. I’m still building myself as a human and as a football player.”