Unlike many off-season additions by the Toronto Argonauts, D.J. Foster’s arrival didn’t lead to much discussion. The Arizona State product quietly signed with the Argos on July 19, over a week after training camp kicked off. After quarantining, he found himself having to play catchup.

He was eventually inserted into the lineup for the Argos home game against Winnipeg in Week Three where he rushed for 101 yards on just 10 carries, scoring one touchdown. With a combination of Foster and John White in the backfield the Argos seem to be on to something good.

“It’s been a blast,” Foster told Argonauts.ca. “It happened really fast, coming up with two days left in camp, and just learning every week. Even in my first game a lot of it was new to me. Using the time in practice to get prepped. In the running backs room, the coaches have done a great job and been very patient helping me adjust.”

As he continues to get used to the Canadian game, he’s shown he could be a special player. There are running backs who can catch, there are receivers who can run, but Foster is unique as he’s played both positions at a high level.

Foster was a running back in high school where he once had a game for the ages, more on that later. He was then a back for his first three seasons at Arizona State before being converted to receiver as a senior and was named the team’s MVP. He’s one of just five players in NCAA Division One history to have 2,000 yards both rushing and receiving, and he set a PAC-12 record by catching a pass in 53 consecutive games.

He had NFL stints with both New England and Arizona as a running back, the position he now plays as an Argo. His unique background and skillset will provide match-up nightmares for opposing coordinators.

“It’s been a growing process but it’s fun being put in different positions,” he said. “I’ve always had the skillset to do it. It’s been fun and I’ve enjoyed learning new positions and being moved around and trying new things.”

The possibilities of how to use their new weapon must be enticing for Head Coach Ryan Dinwiddie and Offensive Coordinator Jarious Jackson, knowing there will be ample opportunity to create a mismatch for their guy, especially when they have both Foster and John White on the field at the same time.

White has been solid for the Argos this year. He’s currently fifth in the league in rushing, and with just seven yards on Friday night will hit a career mark of 5,000 combined rushing and receiving yards.

“It’s been great with John,” said a smiling backfield mate. “He’s helped me a lot. Being in this league for so long, just understanding the game. We communicate while we’re our there, we have a trust with each other. We both love to motivate yet compete and see each other be successful. It’s been a pleasure to work with him.” 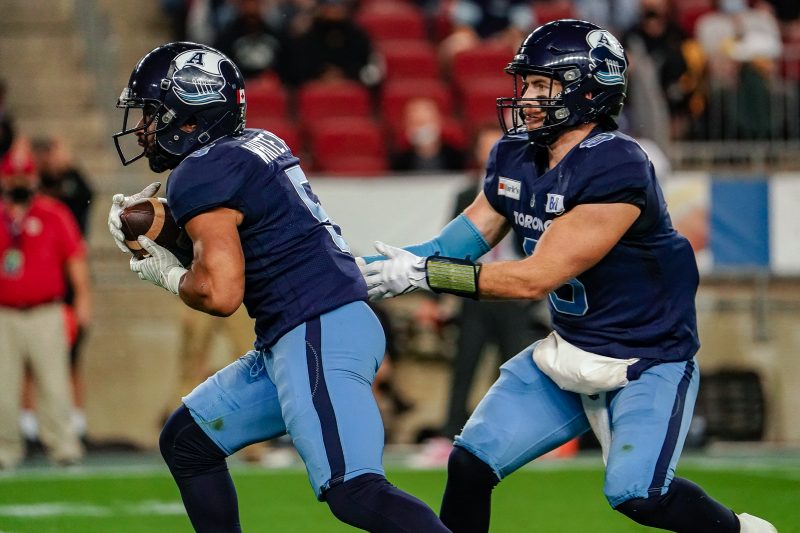 The backfield depth helps the Argos in the short term, but there should also be benefits down the road as the team doesn’t have to rely on just one back taking all the reps and getting all the contact. Both Foster and White should be fresher than most players at that position when the playoffs roll around.

By then Foster will have a better grasp of the game and when that happens, look out.

After once again talking about how much he has to learn and how eager he is to add to mental toolbox, he talked about his confidence in the coaching staff and its ability to get him into situations where there is a substantial mismatch.

“(It’s great) knowing that they’re putting me in a position to have success. I’m confident enough that wherever they move me, I feel like I have the upper hand. I just have to calm down, breathe in, enjoy the game and understand what I’m supposed to do.”

Okay, back to that high school game.

Foster attended Saguaro High School in Scottsdale, Arizona. In his senior year he set a state record by scoring 60 touchdowns, rushing for 3,058 yards. That final season was highlighted by one game where he carried the ball 20 times for a mind-numbing 508 yards with 10 touchdowns.

“It was crazy,” he said with a laugh. “It was actually a playoff game. The final score was 81-48, it looked like a basketball score. It was one of those things where everything was just flowing. It was a blast going out there and doing that. Mike Brown (the former Bears Pro Bowl safety) was an alumnus of my high school and was in attendance. I was excited to put on a show for him and win a playoff game.”

While he’ll never have a 508-yard game in the CFL, his impact on the Argos offence has already been significant. As he continues to learn the game, those contributions should do nothing but increase.