TORONTO — Smoke rushed to escape the steel drum barbeque planted outside of Rap’s on Eglinton Avenue West as owner Horace Rose lifted its hood, revealing rows of jerk chicken crisping in the glow of charcoal embers.

“It was immediate,” Horace said, referencing the gravitational pull his steel drum barbeque, painted in rastafarian colours, had on the neighbourhood.

But that barbeque — and perhaps, the rest of Little Jamaica — only came to be because Horace was hungry one night.

In the 1980s, he was working as a record producer, touring with reggae artist Johnny Osbourne. After a series of back-to-back evening shows, the crew was ravenous, but there was nowhere to eat.

Horace saw a void. People in the music business needed a food establishment that they could rely on always being open late at night and into the early morning.

At the time, Eglinton West was quiet, but Horace had a record shop located between Allen Road and Keele Street, so he decided to place his restaurant there too.

“It was the first Jamaican restaurant there,” Horace said. Soon, a beauty shop opened down the street, then a bakery — both owned by Jamaicans, and eventually, Eglinton West had a warm island breeze that became known as Little Jamaica. “My husband started the whole thing,” Carole Rose said, now co-owner of Rap’s. “He did the groundbreaking for everyone else to walk on that path.”

Horace and Carole were both born in Jamaica’s St. Ann parish on the northern coast. From when he was about six years-old, Horace planted and harvested everything from ackee to guava trees. Meanwhile, Carole admired her aunt’s rum cakes and potato pudding, always on display at the church’s bake sale.

They wanted to bring that authentic Jamaican food to Toronto, particularly, jerk chicken marinated in a generous spice blend and browned on a charcoal fire.

But to do so, they needed a steel drum barbeque. Horace hired a wielder to create the charcoal grill and then found an importer who sold steel drums, which he then cut in half and latched onto the bottom with hinges. 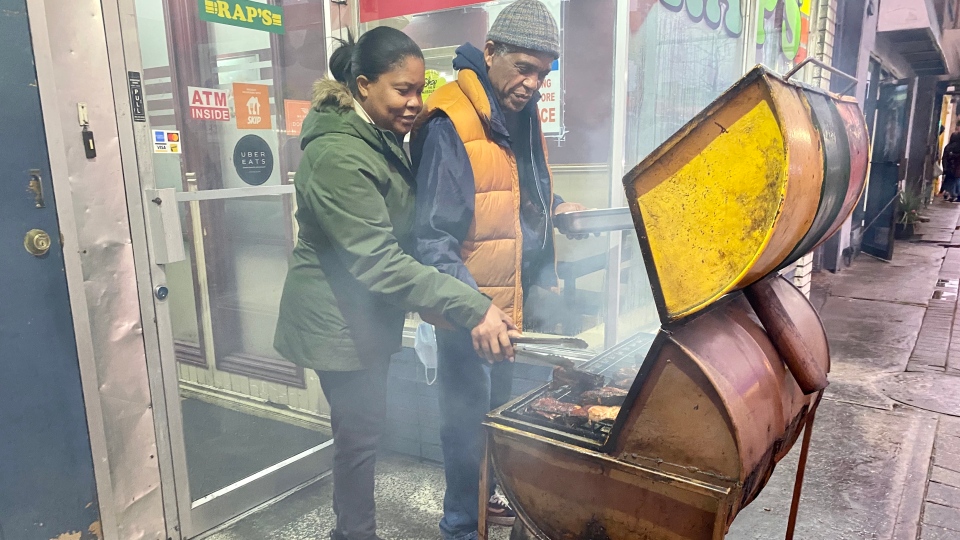 “We started out attracting the local Jamaican community. That was the foundation of the clientele,” Horace said. “But today…we have a rich mixture of customers.”

While Rap’s became a neighbourhood staple, there have been hurdles, some that still endure.

“People are nervous about coming to Eglinton,” Carole said, nodding to the build up of cars inching towards the Allen Road, skirting around fluorescent pylons that have dotted the street for years throughout the Eglinton Crosstown LRT construction.

Beyond traffic congestion, Carole said the social environment that once thrived at Rap’s is deeply missed. In pre-pandemic times, customers crowded the narrow, modest storefront, chatting while waiting for their curry goat or oxtail stew. But now, Carole said, “It’s not there.”

Despite it all, Rap’s has remained resilient. The business managed to keep all of their staff throughout the pandemic and they are currently hiring two more employees to keep up with the pace of pickups and deliveries.

Much of Rap’s sustainability and success has been rooted in that initial inkling that led Horace to open the storefront nearly 40-years ago — he was hungry and desperate for a nourishing meal after hours.

To this day, the establishment still stays open until 5 a.m. Not even a decade of construction or a global pandemic could change the fact that Torontonians are hungry, especially in the hours after sunset.

Toronto FC vs. NYCFC — as it happens! – Hudson River Blue