Alex White may very well be Toronto’s very own doughnut emperor. As the brains behind COPS doughnuts, a passion for dessert has turned into a booming business.

Turning thousands of mini doughnuts a day, COPS is completely self-funded (no investors or financial backers), proving that a unique combination of eccentric brick-and-mortar stores, delicious products and creative expression is a forced to be reckoned with.

The beginning of COPS doughnuts

Playing off the commonly-known and cheeky saying that all cops love a good ole doughnut, COPS’ itty-bitty treats hit the streets in 2018 after months of tinkering with a perfect recipe, thanks to the help of a food scientist and fine dining chef. 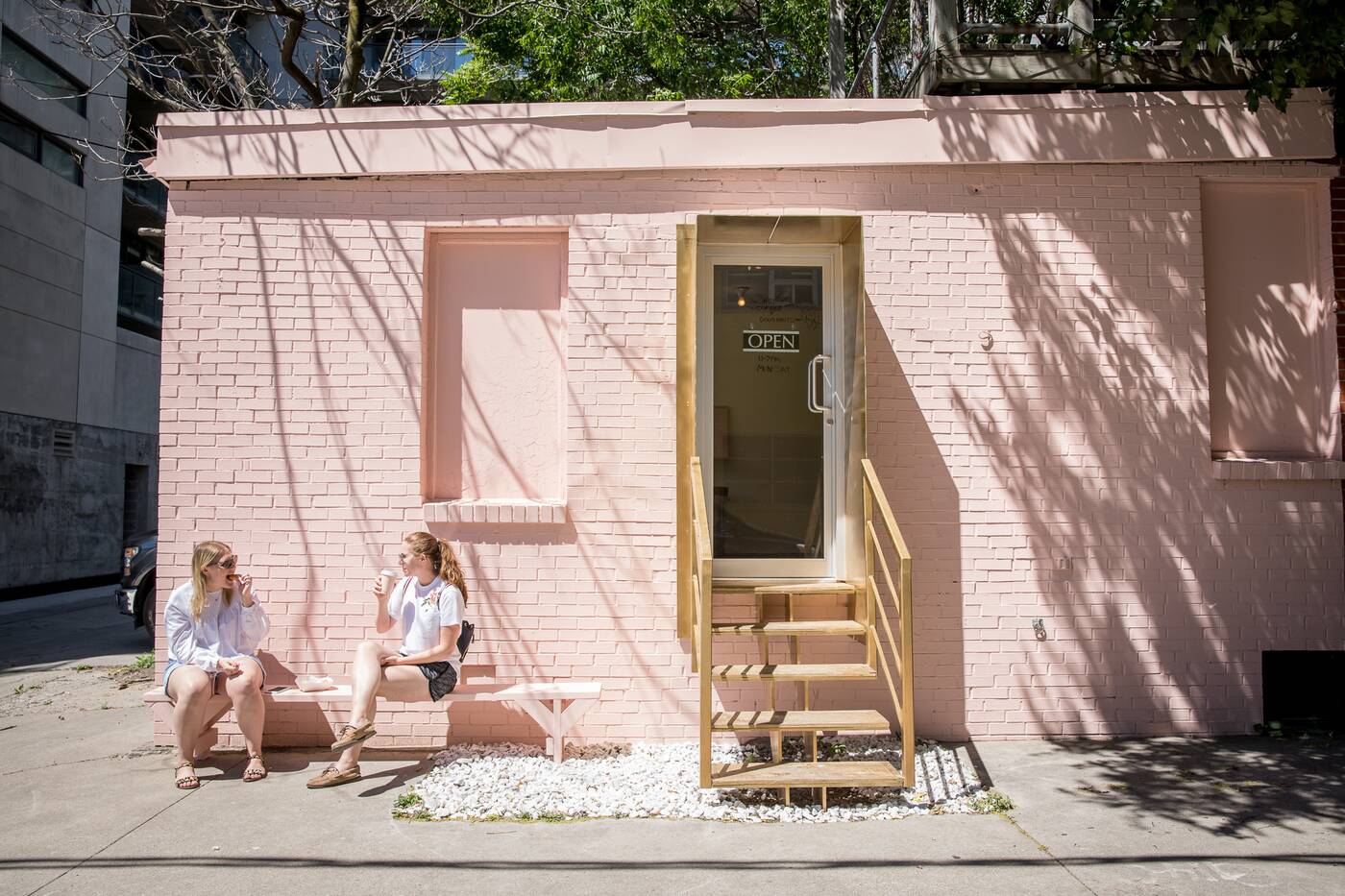 The OG Store on Adelaide when it first opened. Photo by Jesse Milns.

The first location opened at 445 Adelaide St. West that Spring and made an immediate impression with its blush pink branding.

While the focus was always on the doughnuts, the initial shop also made a big deal about its coffee, sourcing its beans from Monogram roasters in Vancouver.

Doughnuts came in two flavours (cinnamon sugar and a rotating glaze) and sold for $6.75 a dozen.

Evolution of the brand

Four years later and COPS has expanded to include three store fronts, including the recently opened 89 Lewis Street in Riverside (former auto-repair shop) alongside their Adelaide and Dufferin spots. 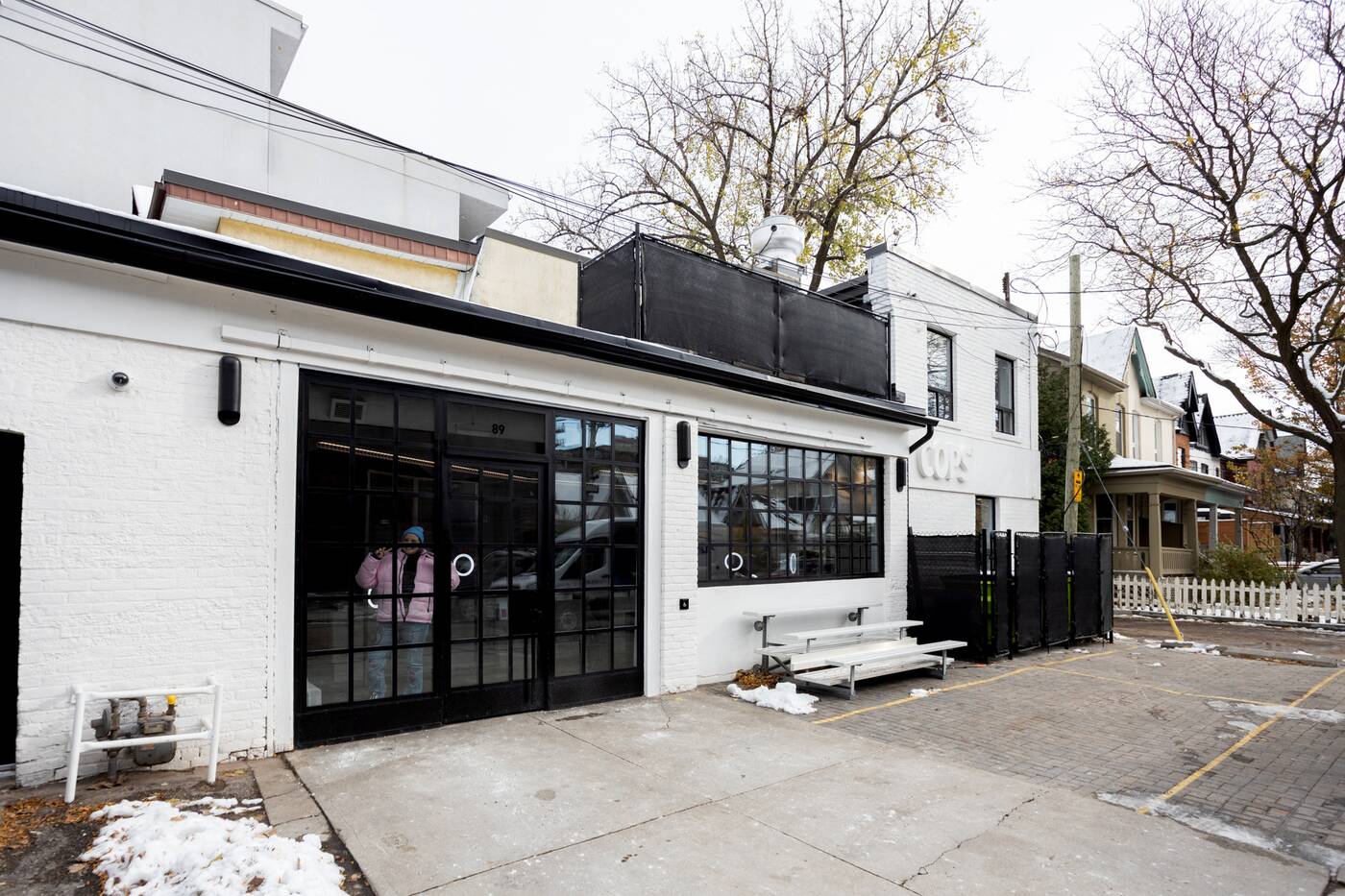 The storefront in Riverside. Photo by Fareen Karim.

“What started as a focus on the product alone has now evolved into a creative expression of what we believe a doughnut shop could be,” White tells blogTO.

Their locations combine whimsy colours (think shades of blush) with modern finishes and a certain type of editorial vibe usually found within the pages of a fashion magazine, much less a doughnut shop. 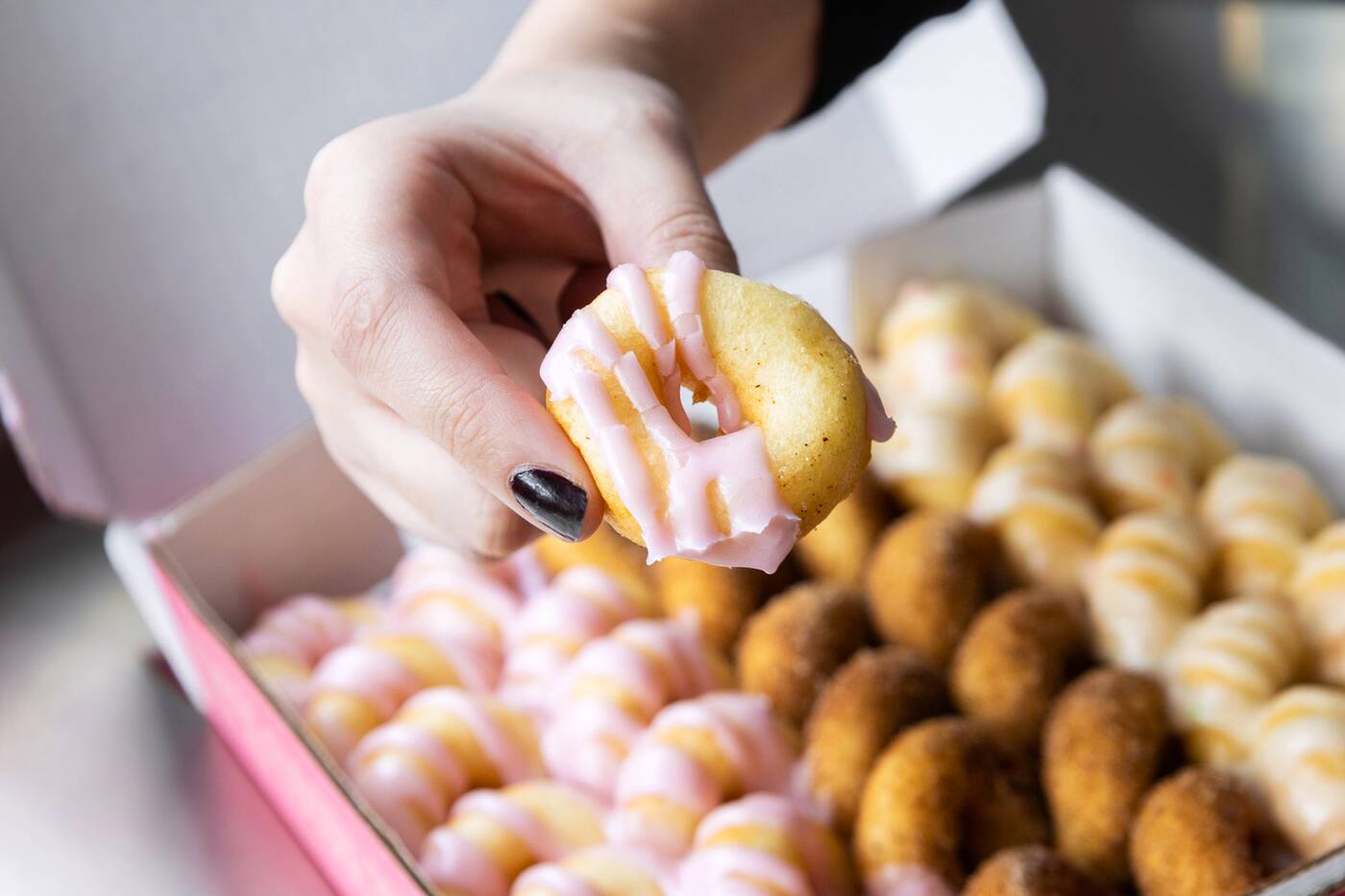 A box of COPS Doughnuts. Photo by Fareen Karim.

“We constantly draw inspiration from different industries such as design, fashion and art to then showcase this through our marketing campaigns and weekly glaze features,” White said.

It’s a concept that’s inherently unique to the business, which specifically works with a fashion photographer instead of a food photographer to communicate their vision through the lens.

“We work with like minded architects to design our spaces that are aligned with our creative vision and can help us bring it to life,” said White.

The newest store and pop-up

This collaborative approach is displayed front and centre at the Lewis location in Riverside, which features purple hues, silver details and a retro space-age feeling thanks to insight from the Toronto firm Kilogram Studio. 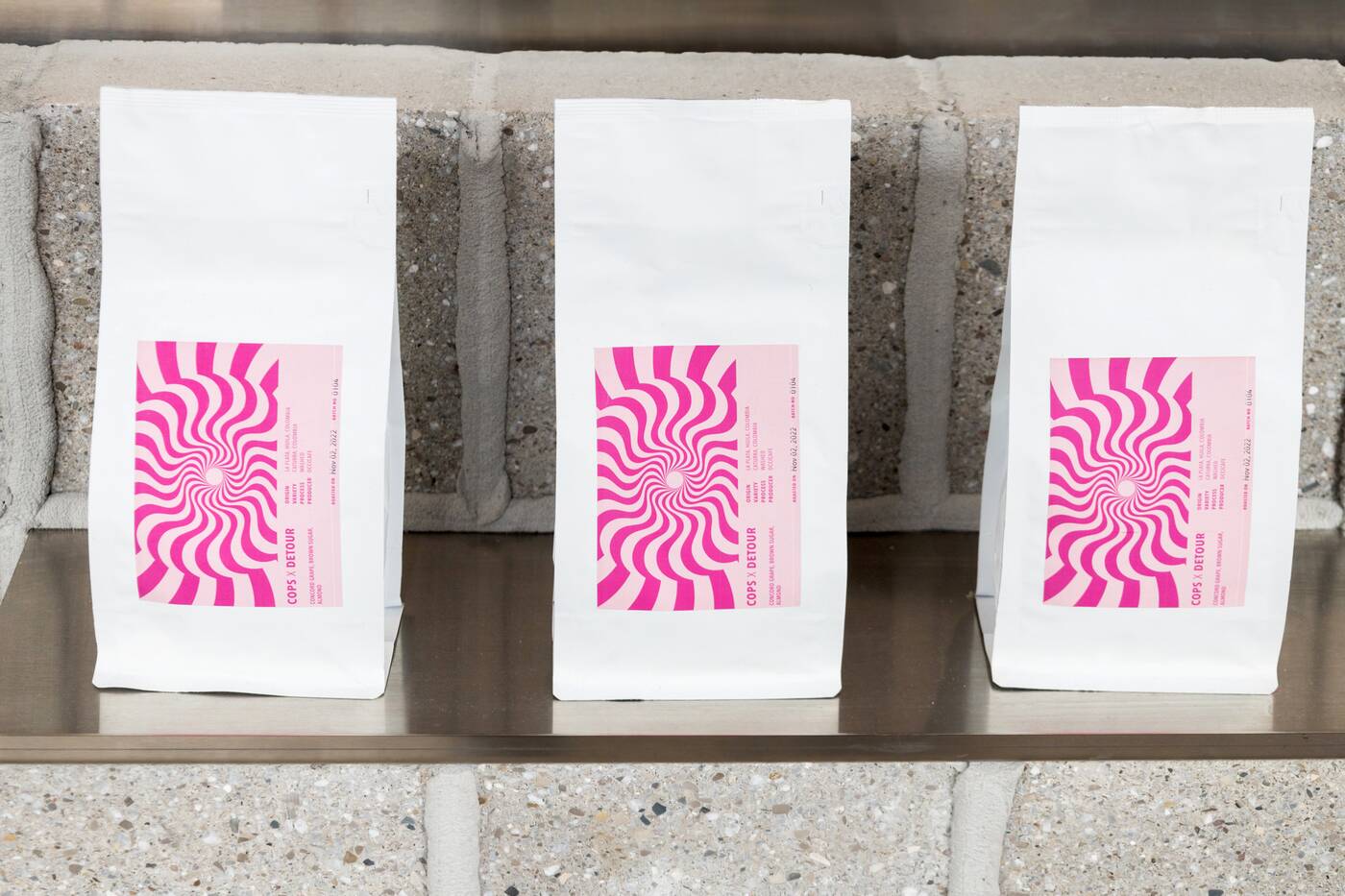 It even extends to the minute details like their distinctive and kaleidoscopic packaging, especially Instagram-able for their Gen Z following.

A recent pop-up (or COP-up) with Soho House and Sweet Chick in New York City’s Lower East Side proves that bigger and brighter things are on the horizon with plans for expansion across North America and global operations. 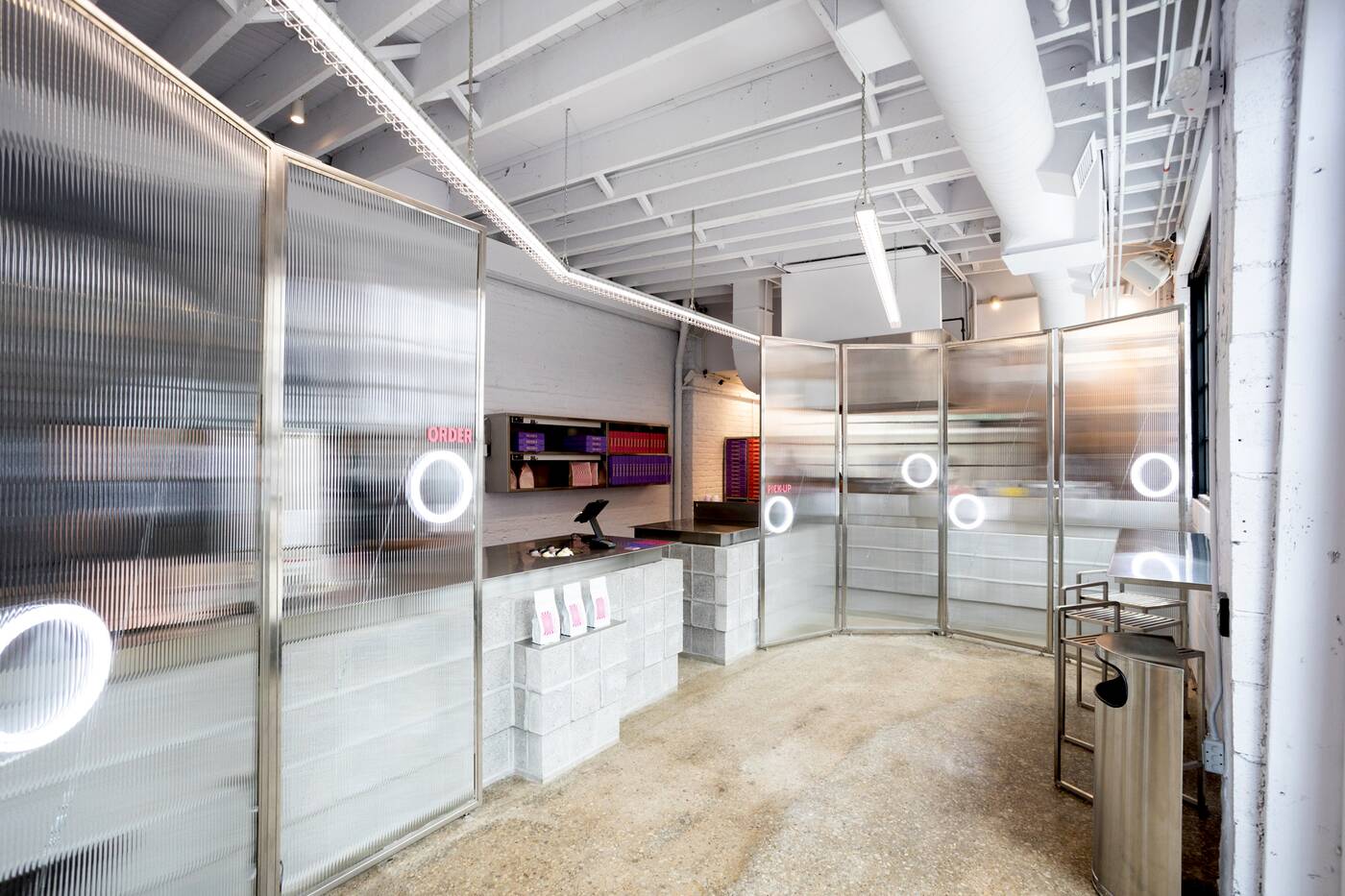 Inside their new storefront in Riverside. Photo by Fareen Karim.

But as their plans for world domination take form, White says you won’t be seeking any franchise stores as “maintaining the integrity of our brand is of the utmost importance.”

But are the doughnuts any good?

A doughnut shop can only grow so much from clever branding alone.

As for the doughnuts themselves, COPS’ number one seller is their Trio and Hotbox packs which serves up 18 or 36 doughnuts with signature sour cream, cinnamon sugar and their weekly feature toppings. 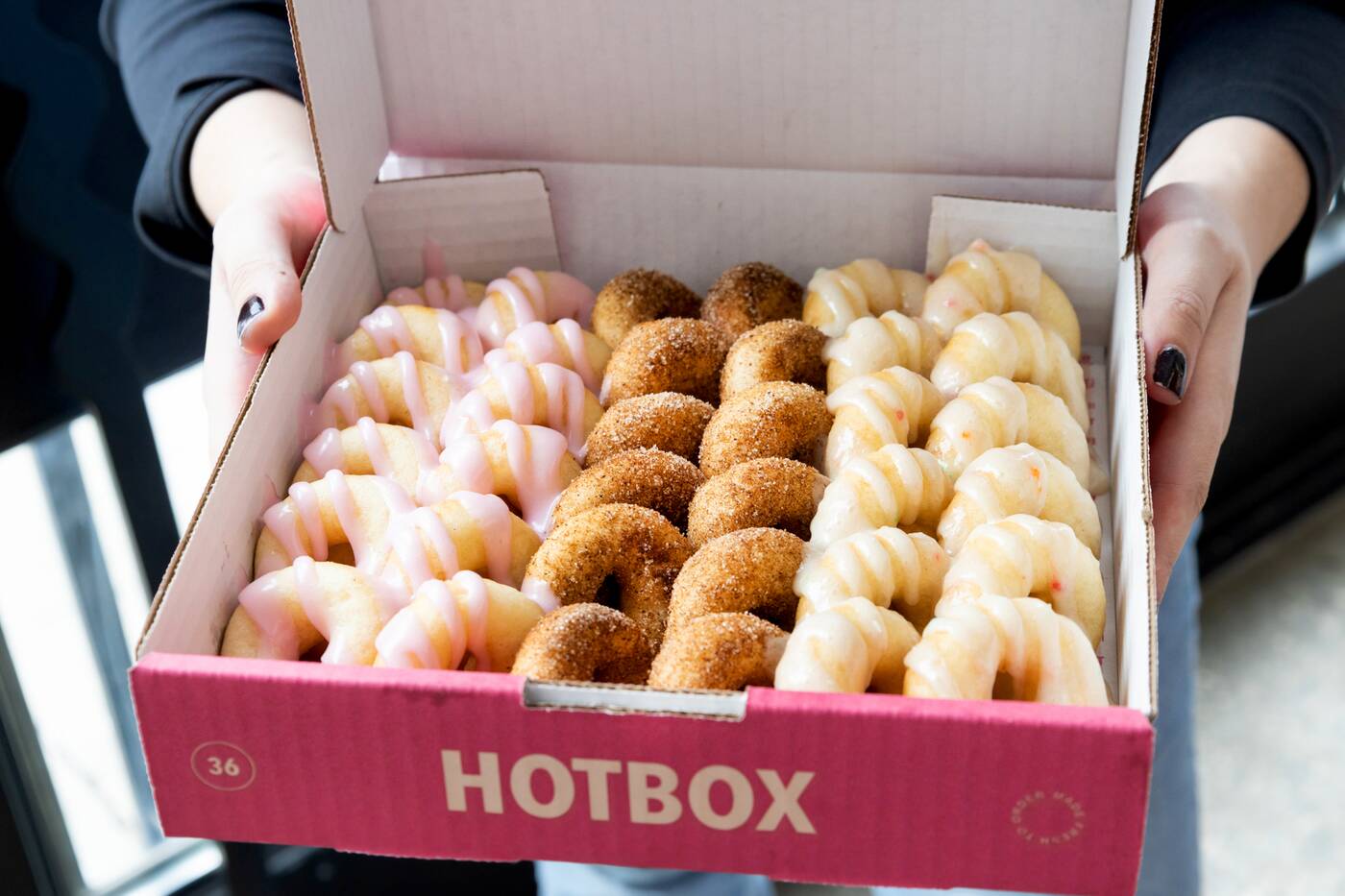 A box of COPS doughnuts. Photo by Fareen Karim.

These days a dozen doughnuts will set you back $9.

Much of their orders come from third-party delivery apps or pre-orders but the business still sees loyal customers strolling in for a mid-day pick-me-up.

Of course COPS is thankful to their patrons and the city of Toronto for helping them by the doughnut empire they are today.

“We’ve been shown a lot of love in Toronto and want to keep building great relationships in our communities and across the city. We’re excited for what the future holds and are extremely grateful for the continued support we receive from this city,” says White.

Toronto Stock Exchange: Why US companies should go public there – Crain’s Chicago Business

We use cookies and data to Deliver and maintain Google services Track outages and protect against spam, fraud, and abuse

In The News for Feb. 9 : Canada mourns victims of Montreal daycare … – northeastNOW

ChatGPT may reset the world of work as businesses rush to own artificial intelligence – CBC.ca

February 9, 2023
We use cookies on our website to give you the most relevant experience by remembering your preferences and repeat visits. By clicking “Accept”, you consent to the use of ALL the cookies.
Do not sell my personal information.
Cookie SettingsAccept
Manage consent