The Ontario Line will add a critical link to Toronto’s rapid transit network, and though the new subway line is still years down the road, big changes are already being proposed for the communities the line will eventually serve.

The Moss Park subway station planned for the corner of Queen and Sherbourne is already spurring investment in the surrounding area, one of the city’s most economically challenged, home to many marginalized communities.

Where transit shows up, condos almost always follow, and a new proposal aims to bring a 31-storey condominium tower to the southwest corner of Queen and Sherbourne, directly across from the future Moss Park station. 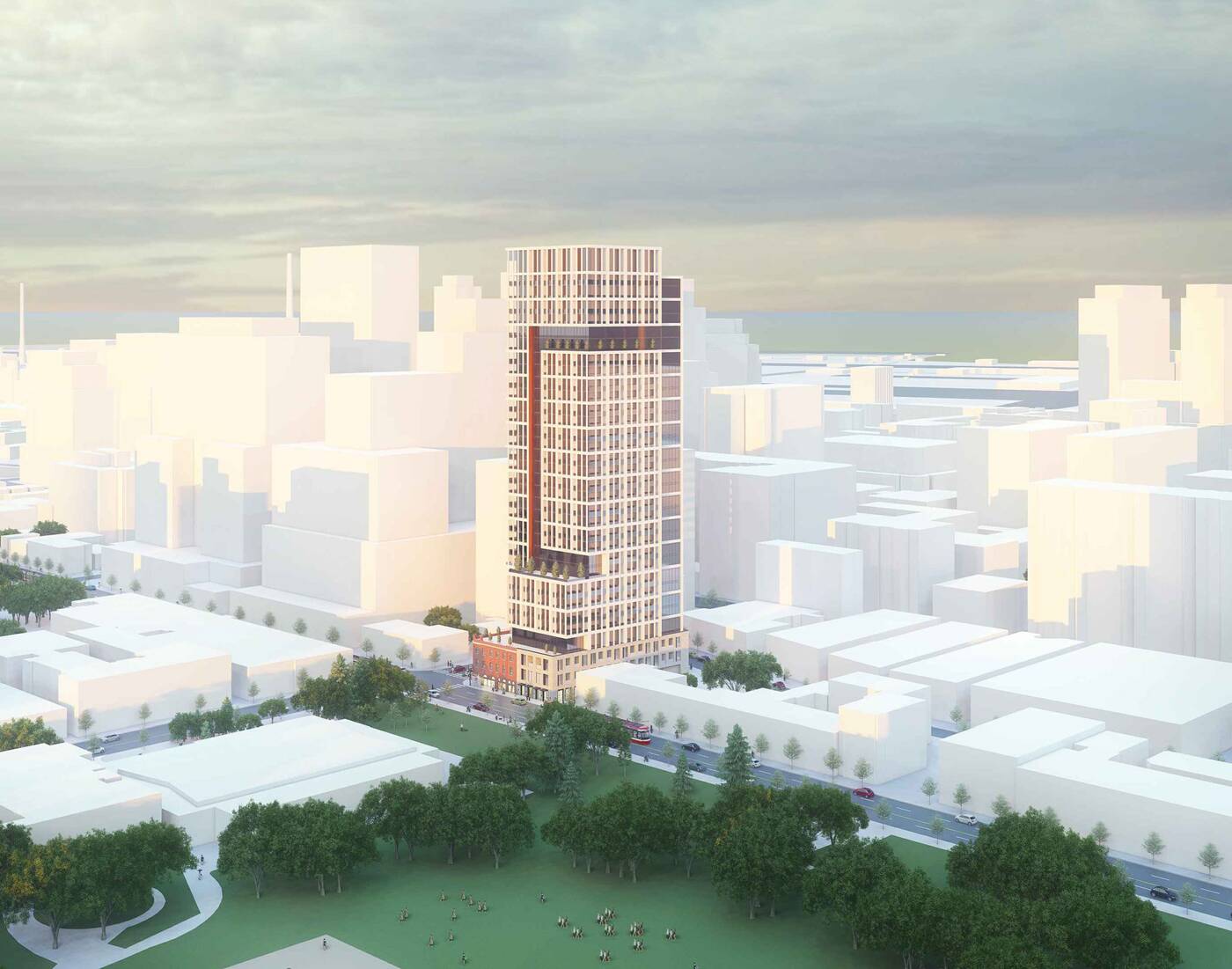 Designed by architects IBI Group, the new condo tower would rise just over 97 metres and bring 340 condominium units to the area, but it’s what’s planned at the base that could really improve the feel of Queen and Sherbourne. 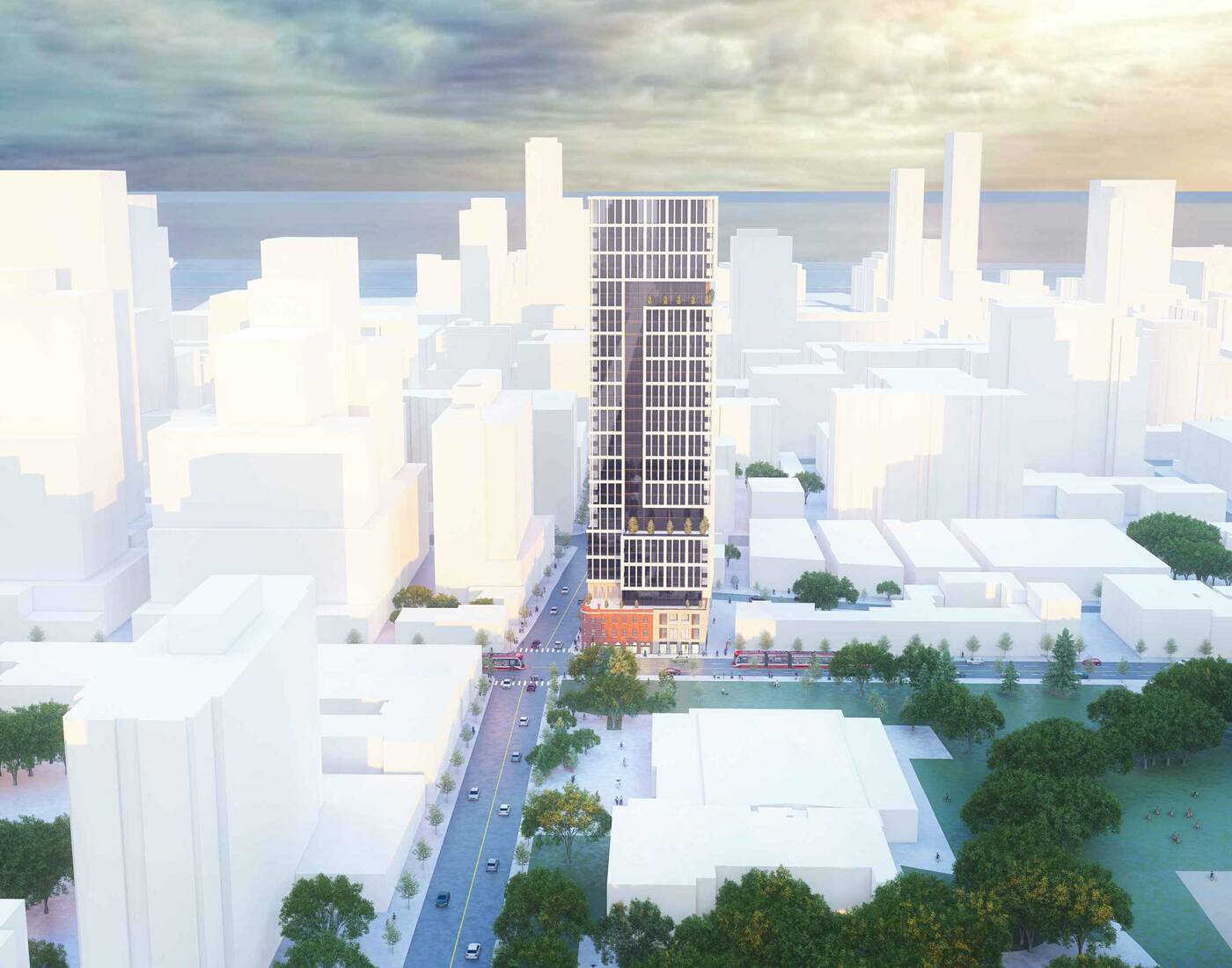 The block is mostly shuttered, though a few businesses would be displaced if the condo tower is approved.

Currently, the block is home to the Anishnawbe Health Toronto facility at the west end of its Queen frontage, and businesses FAMO Sandwich Creations and 1922 Cannabis, as well as an overdose prevention site along Sherbourne Street. 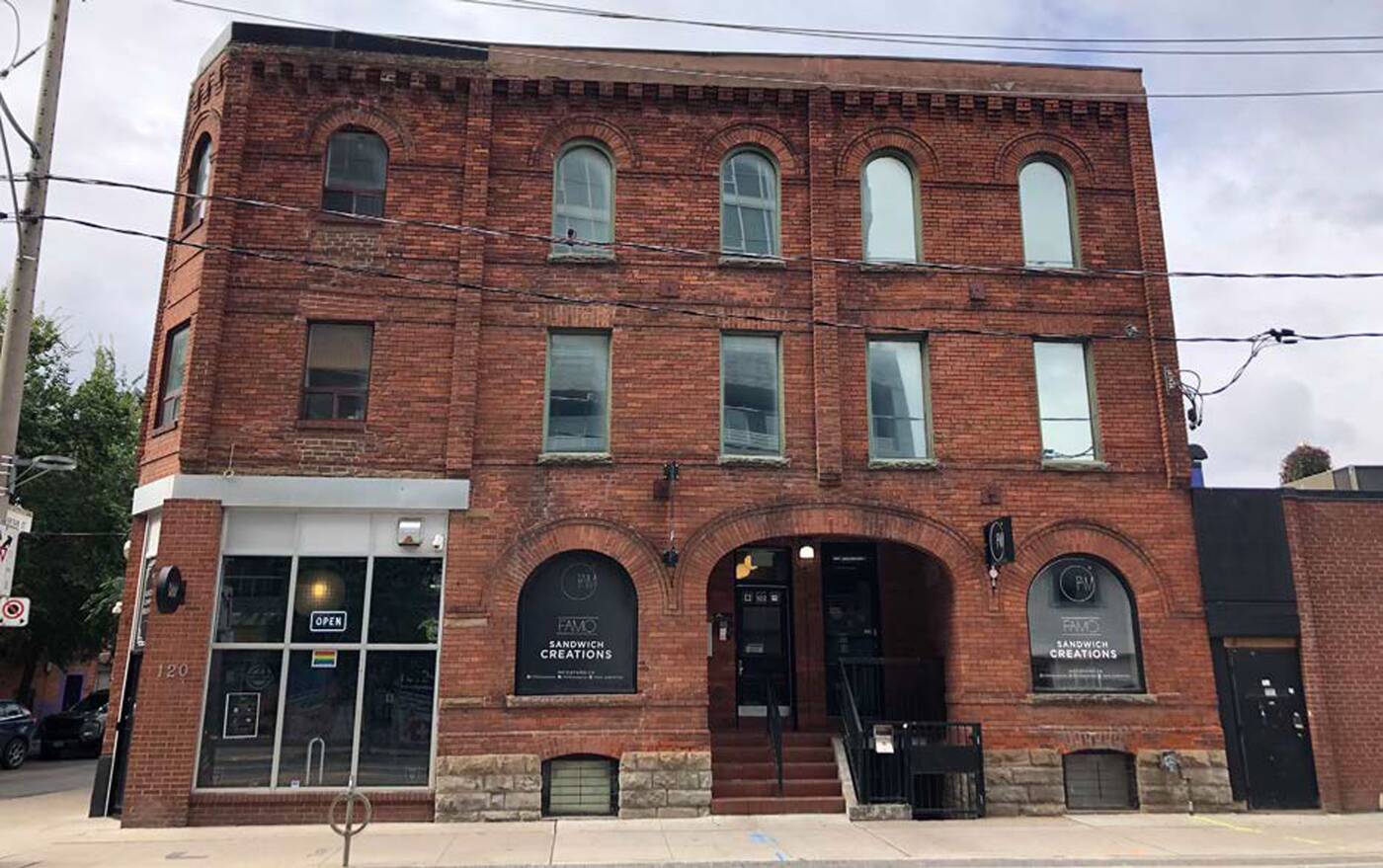 Looking west to the building at 120 Sherbourne, its south and east facades planned to be incorporated into the condo podium. Photo via ERA Architects.

The project aims to incorporate a pair of heritage-listed properties on-site into its podium, including the two-storey, 1893-built structure at 120 Sherbourne, where the sandwich and pot shops are located.

Looking southwest to the proposed development, with the retained facades of 225 Queen St. E. and 120 Sherbourne St. Rendering by IBI Group.

Shabnam Moier, co-owner of FAMO Sandwich Creations, tells blogTO that while the redevelopment plan may have come as a bit of a surprise, it could be a blessing in disguise.

“We did have some update [from the landlord] that this would be happening, but we didn’t know when,” says Moier. “Since lockdowns started, the area has gone even further downhill, and us staying [in the current location] is not practical in the long-term.”

“We might need to think about relocating,” Moier continues, remarking that the lack of office workers in the area and nearby shelters and homeless support services are making the area less hospitable to foot traffic. “It’s sad, but it might be a good thing for our business.” 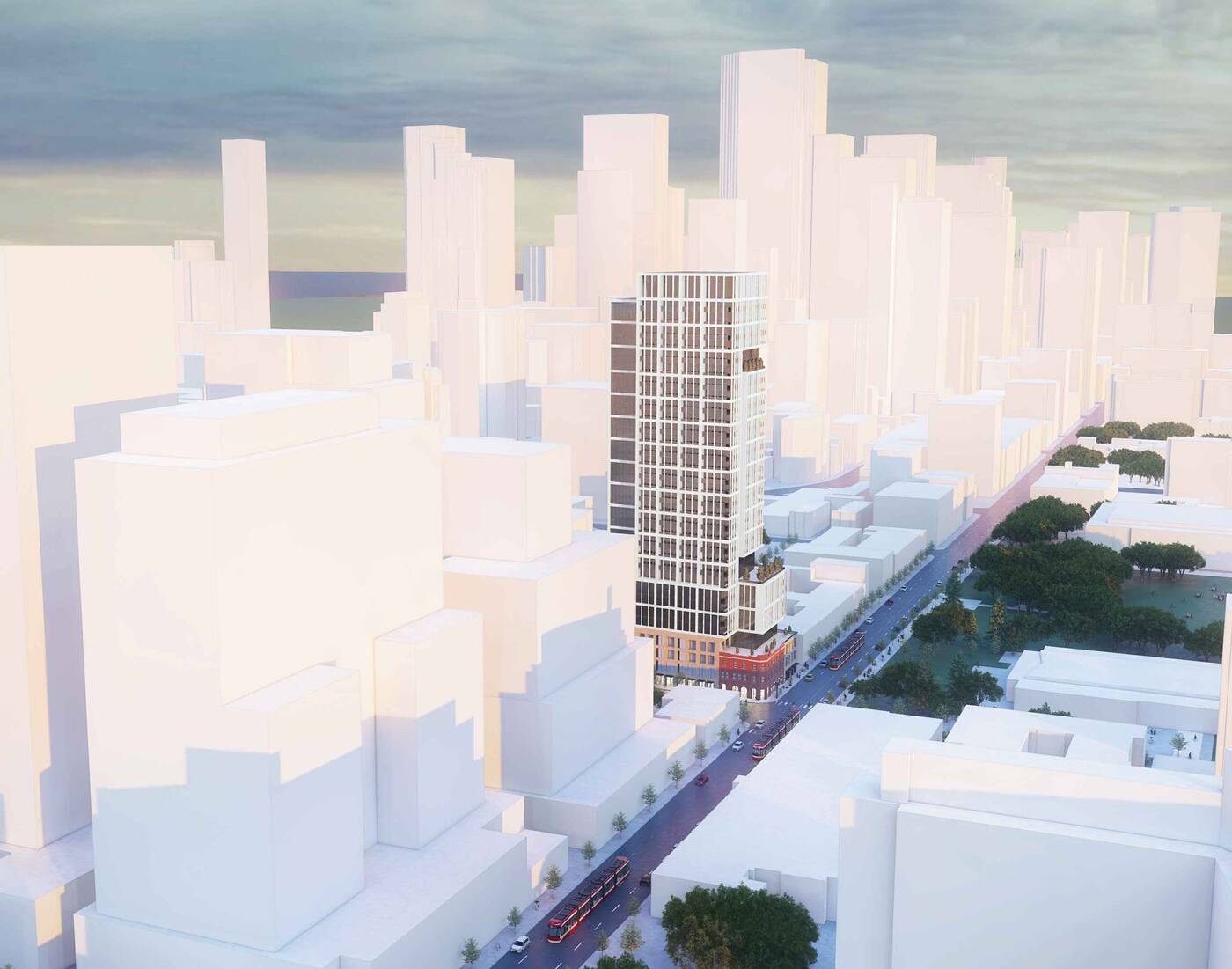 Also in the mix is the three-storey Renaissance Revival-style Kormann House Hotel at 229 Queen East, constructed in 1897, fronting Queen and Sherbourne.

The former hotel has been abandoned for the better part of two decades now. A mid-aughts plan to revive the property fell flat, and years later, its exterior has visibly deteriorated. 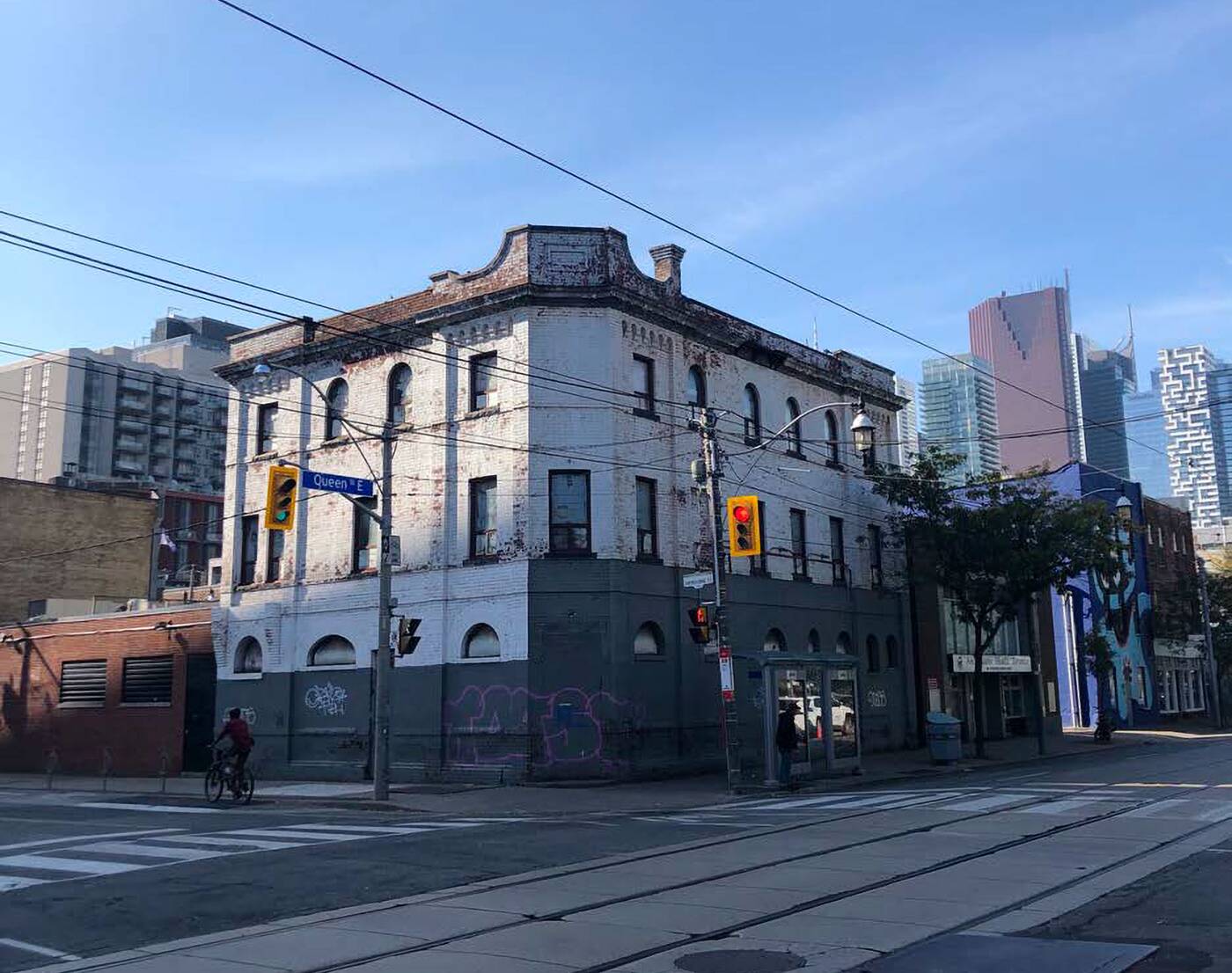 Looking southwest to the abandoned three-storey building at 225 Queen St. E., its outer facades planned to live on in the base of the new condo. Photo via ERA Architects.

While the preservation plans may be welcome news to some, the heritage buildings will only have their exteriors preserved, a practice derisively called facadectomy. The corner building would only have its north and east exterior walls preserved, while the building to the south will have just its east and south walls spared.

Actual construction is still a long way off, approvals pending, but this plan could signal a new future for an area that has remained mostly insulated from the condo boom.

Back from England, Richie Laryea picks up where he left off with Toronto FC – The Globe and Mail