This is pretty close to worst-case scenario for the Maple Leafs and their crease.

Matt Murray is out. He’s still recovering from the adductor injury he suffered at a morning skate three weeks ago. He was expected to miss a minimum of four weeks, and almost certainly longer. Leafs coach Sheldon Keefe said Murray was still “quite a ways away” when the goalie was spotted on the ice earlier this week.

And now, of course, Ilya Samsonov is out with a knee injury. For how long is uncertain. Keefe had no update after the Leafs’ resounding win over the Bruins on Saturday, a performance that will inevitably get overshadowed by the precarious state of the crease.

All of the above mentioned basically comes down to this: The crease belongs – for now – to Erik Källgren, who’s played 18 NHL games, and an even bigger question mark behind him. 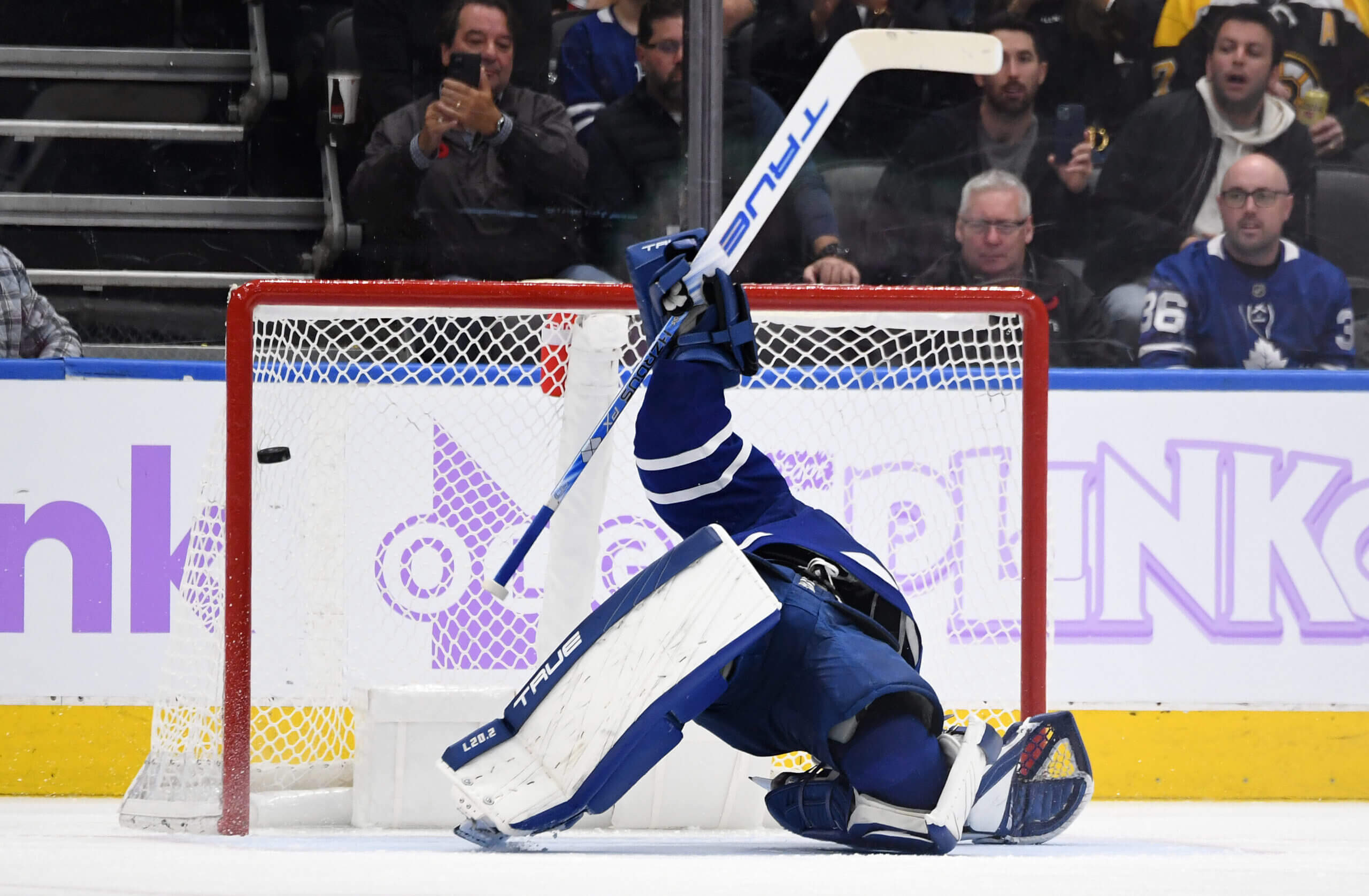 Ilya Samsonov was injured on this play against the Bruins. (Dan Hamilton / USA Today)

Källgren has been here before – sort of.

Last March, with Petr Mrazek scuffling (badly) and Jack Campbell out with an injury, the Leafs turned to Källgren to calm things down in their crease. Even though he had no NHL experience at that point, Källgren did exactly that.

He turned in a 35-save shutout against Dallas and then beat Carolina two nights later.

Increasingly though, Källgren looked more like a goalie who wasn’t ready to play in the NHL. More like an AHL goalie. He won eight of his 14 appearances but posted only an .888 save percentage. He gave up almost eight goals more than expected.

In four appearances this season, Källgren has registered an .884 save percentage. He’s yet to register a win. (Samsonov got the win on Saturday.)

And now the Leafs need him to be the guy until one of Murray or Samsonov returns.

If it’s a short-term thing for Samsonov, the scale of the problem obviously diminishes greatly. It’s not a crisis in that case. Källgren can stand in for a few starts and be competent. A weeks-long stint, on the other hand, could be trouble.

It could expose the Leafs’ crease, which also includes an injured Joseph Woll.

“Not many teams in the league have three goalies injured in their system and feel comfortable about that,” Keefe said. “But it’s the reality that we have here right now. Lucky for us, Källgren being the guy that has to come in and clean things up — it’s a position that he’s been in and a position our team has been in, and we are comfortable in that.”

It’s certainly an unfortunate set of circumstances for the Leafs, but not one that was impossible to foresee.

Which is where we stand.

The Leafs opted not to add a more secure, experienced third option in the summer. Perhaps they saw enough in Källgren’s stint with the NHL club last season to believe he could handle fill-in duty just as well as someone like Michael Hutchinson.

The Leafs went down the Hutchinson well repeatedly. It did not go well, repeatedly. Perhaps they were done with a guy like that. Perhaps they didn’t believe he would be any better than Källgren, no matter his experience.

The problem with that approach is that it leaves the crease of a team with so much on the line this season in vulnerable, unproven hands.

Again, maybe Samsonov won’t miss much time. Maybe Murray will return in a few weeks. Maybe Källgren can be just OK in the interim, especially if the team in front of him plays like they did against the Bruins.

“He’s just really calm and collected in the net,” Auston Matthews said of Källgren. “He doesn’t really say too much. But I think his demeanour does the talking for him. His confidence speaks for itself. He’s really steady in there. So I think all of us have a lot of confidence in him to go in there and win some games for us.”

It’s possible the Leafs have to move swiftly on a trade to increase the level of stability in goal.

The Vegas Golden Knights might offer one path. They’ve got Laurent Brossoit on a conditioning loan in the AHL at the moment, with Logan Thompson and Adin Hill both around with the NHL club.

They’ll likely have to get rid of one goalie.

Brossoit carries a rich $2.325 million cap hit. Hill costs a little less – $2.175 million on the cap. Thompson is their starter.

With Jake Muzzin sidelined, the Leafs have the cap space to add a pricey option if they so choose.

Could brief former Leaf Aaron Dell be another possibility? He’s playing in the AHL at the moment in the Sharks system. He comes with only a $775,000 cap hit.

The Leafs’ short-term solution will evidently be Keith Petruzzelli, according to Elliotte Friedman. Petruzzelli has won his first six starts with the Marlies this season. He’s a 6-foot-6 former Red Wings third-round pick. He’s yet to play an NHL game though, and in fact, has played only 11 AHL games to this point after going the college route.

Apparently, TOR has signed G Keith Petruzzelli to an NHL deal. He was on an AHL contract, but will now be promoted w/Samsonov injured tonight. Was 6-0 with Marlies this year

Losing Nicolas Aube-Kubel on waivers did leave the team with one available contract slot.

Källgren knew something was wrong with Samsonov when his teammate arrived at the bench in discomfort during a TV timeout in the second period. Samsonov was hurt on Brad Marchand’s penalty shot. His left knee bent awkwardly, but he played the remaining 15 minutes of the period.

Källgren overheard Samsonov talking to the medical staff though and knew there was a problem.

“I kinda just started to prepare mentally to go in,” Källgren said.

He did his job, stopping all seven shots he faced to procure the Leafs their biggest and best win of the season.

Now he may be needed for a whole lot more.

Stats and research courtesy of Cap Friendly and Evolving Hockey

New Phoenix-Canada flights on Lynx Air: How to get low fares – The Arizona Republic