TORONTO — As the United Nations COP26 climate conference comes to a close, the race to reduce Canada’s greenhouse gas emissions is on. One of the most ambitious of Prime Minister Justin Trudeau’s list of pledges and promises for climate action is a cap on emissions produced by Canada’s oil and gas sector.

In July, Canada formally committed to reducing its greenhouse gas emissions by 40 to 45 per cent below 2005 levels by 2030. The government eventually plans to hit net-zero emissions by 2050.

But the question remains: are these goals for cutting greenhouse gas emissions actually achievable?

Simon Dyer is deputy executive director of the Pembina Institute, a non-profit think-tank campaigning for Canada’s transition to clean energy. While he recognizes the government’s eagerness to reduce emissions, he notes that no concrete policies are yet in place to achieve this.

“We don’t have a cap or a limit or the regulations that will actually determine how much these companies would be allowed to emit,” he told CTVNews.ca in a video interview Nov. 3. “There’s nothing like strong policy to actually drive innovation and investments in emissions reductions. That’s the missing piece at this point.”

“While there’s been progress for some sectors…[other] sectors continue to increase,” he said. “The largest economic subsector from an emissions perspective in Canada is oil and gas, and [oil and gas] emissions have increased 20 per cent since 2005.”

THE ROAD TO NET-ZERO EMISSIONS

Part of the solution to reducing greenhouse gas emissions lies in stronger regulations within the oil and gas industry, says Dyer. While a cap on emissions is important, Eddy Perez, international climate diplomacy manager with Climate Action Network Canada, urges the government to go right to the source.

“We have focused a lot on emissions intensity, but I think we need to focus on production,” he told CTVNews.ca over the phone Nov. 3. “There are some actors that are focusing on the intensity of emissions, making sure barrels of oil are less carbon-intensive, but some of these actors continue to advocate for greater production of oil and gas.”

According to a recent report compiled by Environmental Defence, Canadian oil and gas companies are expected to increase annual production by almost 30 per cent over the next 10 years, compared to 2020 levels. Jobs within the oil and gas sector are also on the rise, as companies record surging profits. Dale Marshall, national climate program manager for Environmental Defence, says this growth in production is not compatible with what countries have agreed to accomplish when it comes to tackling climate change.

“This is completely out of line with what the International Energy Agency says is needed to limit warming to 1.5 degrees [Celsius],” Marshall told CTVNews.ca in a video interview Nov. 3, referring to one of the key goals outlined in the Paris Agreement. “I think that it’s dubious that we would reach that target.”

Marshall is calling on the federal government to stop approving new fossil fuel projects beyond 2021, as per recommendations by the International Energy Agency. By halting the approval of oil and gas projects starting today, Canada would see a sharp reduction in fossil fuel production over the next 10 years, he says.

“The Canadian government should be actively retiring existing oil and gas projects, putting significant resources into a just transition for workers and communities,” Marshall said. “Fossil fuels are the source of the problem in terms of climate change, so moving away from them entirely is the way to go.”

Perez praises initiatives like carbon pricing, insisting it has the most potential for advancing climate action at the domestic level, but he also says a number of other policies that should be implemented alongside it. He advocates for an end to infrastructure projects that don’t align with the country’s goal of fighting climate change, whether it’s natural gas projects or those like the TransMountain pipeline.

“[Oil and gas] is the sector in the Canadian economy that has the hugest burden on Canada’s responsibility when it comes to tackling the climate crisis,” said Perez. “[Carbon pricing] is an important piece of the toolbox, but it needs to be complimented with other policies and we can’t just rely on carbon pricing to meet our climate goals.” 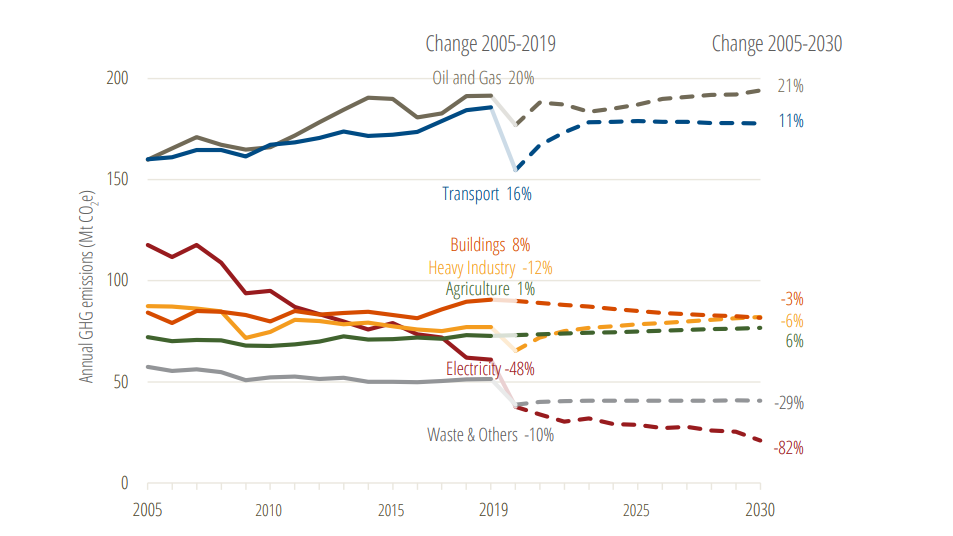 “[This] is an unprecedented initiative by the Canadian energy industry,” said Tim McKay, president of Canadian Natural, in a press release issued last Thursday.

According to McKay, one of the main ways CNRL will accomplish this is through continued investment in technologies designed to improve the company’s environmental performance while reducing its emissions footprint.

“Canadian Natural and Pathways alliance members are developing several technology pathways that when implemented will strengthen our leading ESG [Environmental, Social and Governance] performance through meaningful emissions reductions while maintaining jobs in the oil sands sector and creating thousands of new construction and permanent jobs in the energy and cleantech industries,” he said in the statement.

The oil and gas giant recently set new environmental targets itself. One of its goals is to cut methane emissions from its North America exploration and production business in half from its 2016 baseline by 2030. By 2026, it aims to reduce in situ freshwater usage and mining freshwater usage intensity by 40 per cent from 2017 baselines.

But the company insists it will still need support from both the provincial and federal governments to reach its targets.

THE NEXT DECADE WILL BE ‘CRITICAL’

When looking at whether or not Canada’s climate targets are achievable, some are hopeful. Perez insists that not only is it possible for Canada to meet its goal of reducing greenhouse gas emissions by 40 to 45 per cent by 2030, it’s also possible to exceed it.

Based on scientific models by Climate Action Network Canada, he says it’s possible for Canada to reduce emissions by 60 per cent compared to 2005 levels by 2030. This would be the result of international and domestic initiatives, including greater fuel efficiency and electrification in the transportation sector, and greater investments in green buildings with retrofits, efficiency upgrades and renewable energy.

“There is room to do more,” said Perez. “But current pledges are certainly feasible at this moment.”

Others aren’t as hopeful. Given Canada’s track record when it comes to meeting climate goals, Marshall says he isn’t holding his breath. He points to Canada’s goal to reduce methane emissions back in 2016 as an example. At the time, the government pledged to cut methane emissions in the oil and gas sector by 40 to 45 per cent below 2012 levels by 2025. Just last year, models from Environment and Climate Change Canada showed only a 29 per cent reduction by 2025.

“I don’t have a lot of faith in a stronger 2030 target when we’re not even on track to the target that’s four years out.”

Still, Dyer insists there’s plenty of reason to be optimistic.

“There’s been a lot of talk about climate action for the past 20 years, and it only feels like in the last couple of years we’ve started to actually get serious about putting the policies in place to actually reduce emissions,” said Dyer. “The next decade out to 2030 is going to be critical.”