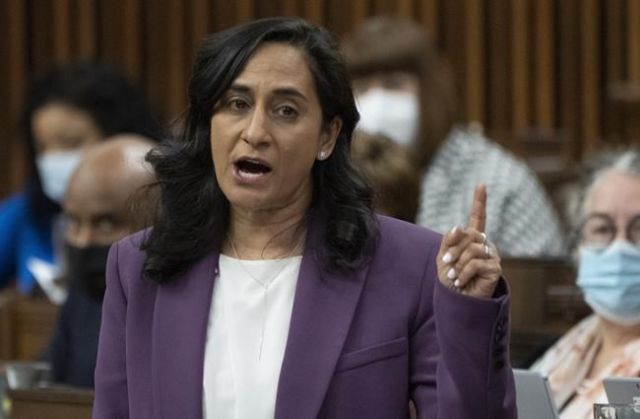 Minister of Defence Anita Anand rises during Question Period, on March 30, 2022 in Ottawa. Anand is promising to introduce a “robust package of investments” for North America’s aging defences in the coming months. THE CANADIAN PRESS/Adrian Wyld

Defence Minister Anita Anand is promising a “robust package of investments” for North America’s aging defences in the coming months, as Ottawa faces growing pressure to boost military spending and work with Washington to protect the continent.

Anand made the commitment during an appearance before the Senate defence committee on Monday, only days before the Liberal government is to unveil a federal budget that many expect will include new money for the Canadian Armed Forces.

“The current defence and security climate also has underscored that we need to do more to bolster our defences in Canada and North America at large,” the minister told senators in reference to Russia’s attack on Ukraine.

“To that end, in the coming months, we will be bringing forward a robust package of investments to bolster our continental defence in close co-operation with the United States.”

Yet defence officials appearing before the committee after Anand could not say when actual work could begin on modernizing the North American Aerospace Defence Command, which is controlled by both the U.S. and Canada.

That is despite military officials and experts having warned for years about the state of Norad, parts of which are now obsolete as Russia and other adversaries have developed more advanced weapons.

It is also despite Canada facing pressure from the NATO military alliance to increase its defence spending, with an injection of funds for Norad seen as the easiest and most likely scenario when the Liberals unveil their budget on Thursday.

That’s because while the government has already planned and costed out most expected military purchases over the next 15 years, there has been no budget or significant work started on Norad modernization.

Defence Department deputy minister Bill Matthews told senators the specific timeline would depend on when officials get direction from Ottawa and Washington on what they want with Norad in its new form.

While Matthews didn’t spell out any specifics, Canada and the U.S. have in the past differed on ballistic missile defence. The new system is expected to detect and potentially eliminate threats from air, water, space and cyberspace.

“You’re looking at a multi-year endeavour here, obviously working hand in hand with our allies to prioritize and land on specific plans,” Matthews said. “But until there’s been formal decisions made, we cannot be more specific than that.”

Successive Canadian and American governments have been promising for years to modernize Norad, which was first created during the Cold War to protect against a Soviet attack.

Yet despite increasingly urgent warnings from senior military commanders on both sides of the border about the need to address a growing number of gaps in North America’s defences, many are still waiting for Canada to act.

During a trip to Ottawa in December, Norad commander U.S. Gen. Glen VanHerck said he was awaiting political direction on upgrading Canada’s key contribution, a string of radars built in the Canadian Arctic in the 1980s called the North Warning System.

Military officials have been cautioning for years that the system, built to detect Russian bombers approaching North America from over the Arctic, is obsolete because of the development of missiles with increasingly longer ranges.

The U.S., meanwhile, has been pressing ahead on a number of fronts, including the deployment of new missile interceptors and artificial intelligence to merge data from a variety of different sources to detect an attack.

Anand told the committee she has had several discussions with U.S. Defense Secretary Lloyd Austin, and pointed to investments in last year’s federal budget that have been used to research long-range communications and radar.

“Our efforts to keep our countries and our continent secure are closely intertwined, including through Norad and our joint efforts in the Arctic region,” she said. “It’s important we remain full and equal partners.”

“The threat to our continent is very clear and is rapidly advancing as we take a look at technological advances that our adversaries are making,” he said. “We are no longer as safe as we once were in North America.”

Anand also revealed during the committee hearing that she expects to receive a report on sexual misconduct in the military from retired Supreme Court justice Louise Arbour on May 20.

The report, which is intended to identify ways for the military to better handle such cases and issues, is supposed to be made public one week later.