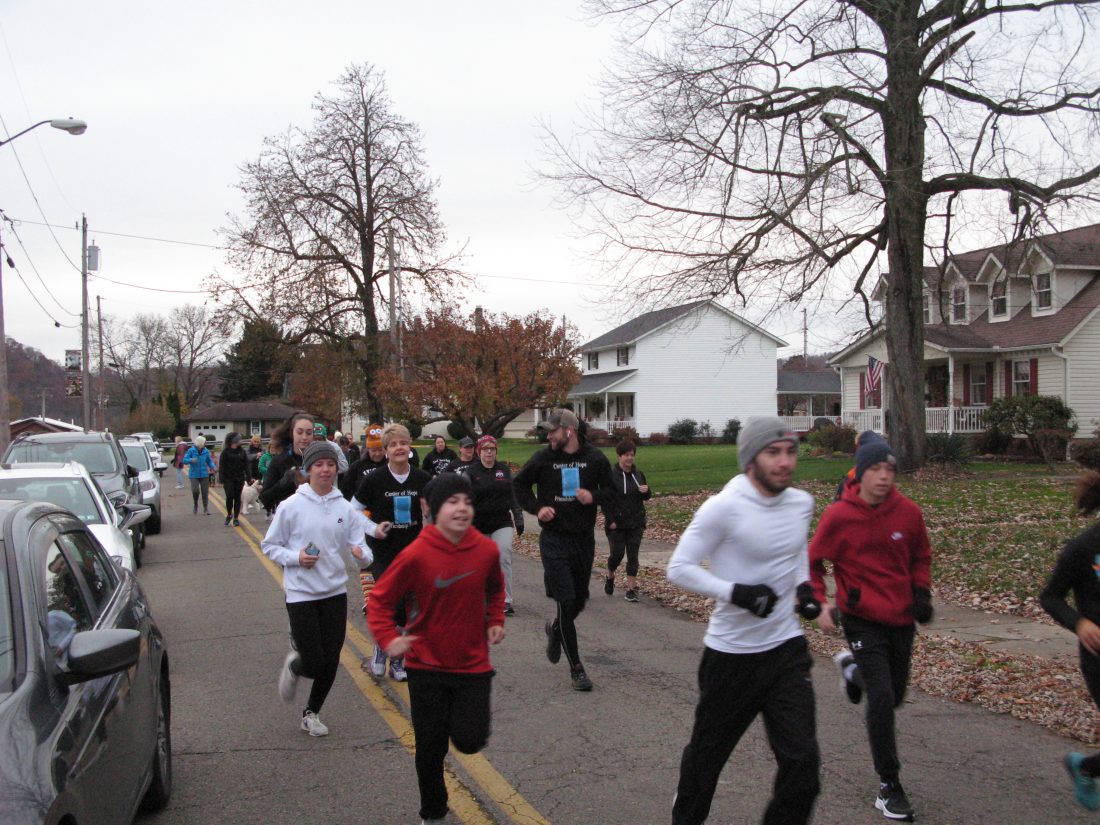 Warren Scott A HOLIDAY TRADITION — About 60 area residents made their way from North River Avenue in Toronto and back as participants in the Sixth Annual T-Town Turkey Trot, a Toronto tradition that raises funds for the Helping Hands food pantry.

TORONTO — About 60 area residents warmed up for the Thanksgiving holiday by running or walking the streets of Toronto in an event that raised about $2,100 for the Helping Hands food pantry.

The amount raised by the Sixth Annual T-Town Turkey Trot included a $1,000 match provided by the J.E. Foster Funeral Home and $750 raised by the sale of popcorn and snow cones by students at Toronto High School.

Held at 8 a.m. and incorporating 3.1 miles of city streets, the event drew both regulars and newcomers.

Torontoan Lauren Baker recalled participating in the run’s first year, when it drew no more than a dozen participants and raised $200 for the local food pantry.

She noted the weather has varied from year to year.

“One year it snowed. Two years ago, it was very cold, but we’ve been very fortunate,” said Baker.

Toronto native John Fallon, who came home for the holiday from Cleveland, said, “I’m just going to try to keep up with my mom,” who he noted is a regular runner.

Four friends from Steubenville and Wintersville –Sara Nocera, Lindsey Smith, Christina Newlan and Jenna DiBenedetto — who wielded drumstick-shaped inflatables and wore black T-shirts depicting a cartoon turkey I sneakers and bearing messages such as “Huffin’ for the stuffin’.”

“We decided to do this at the last Thanksgiving run we were in,” said Nocero, who added it was at the Marland Heights Turkey Trot in Weirton Saturday that they learned of the Toronto run.

Asked if she will be preparing food after the race, Nocero said before she left, she left a turkey in the oven to be monitored by her mother.

Amanda Yazbek, who launched the run, said she and other volunteers have kept it a low-key affair so participants have plenty of time for holiday preparations and socializing.

Yazbek also is president of the advisory board for Helping Hands, which has supplied perishable and non-perishable food to 300 to 450 households in recent years.

The runners and walkers of various ages are invited to make a donation of their choice, with those who give $20 entered into a drawing for more than 15 gift cards donated by area businesses.

As they awaited the run’s start, participants were asked what they are thankful for.

Maureen Taggart, who is secretary of the Helping Hands board; replied, “Family, friends and good health.”

Baker said, “I have a really great family and the family I have married into is really great, too. My friends also are almost like family.”

Fallon said, “Well, I just got married in July, so I’m thankful for my new wife. And to be able to come back to the Steubenville-Toronto area and spend time with my family.”

(Scott can be contacted at wscott@heraldstaronline.com.)

Opinion | Lack of transit options keeps Cambridge at the back of the bus – TheRecord.com