TORONTO — With only one more week left to go in the election campaign, a recent dip in support for NDP Leader Jagmeet Singh could indicate that some of his party’s supporters are swinging to the Liberals, according to pollster Nik Nanos.

According to Nanos Research’s nightly tracking data conducted for CTV News and the Globe and Mail, support for Singh as the preferred prime minister has steadily declined over the past four days. The latest polling data, which was released Monday, puts him at 16.3 per cent support – a marked drop from the 21.2 per cent support he enjoyed on Thursday.

“The one definitive trend in the last four days is Jagmeet Singh and the big question is: ‘Is that a leading indicator that some New Democrats might swing to the Liberals?’” Nanos asked during Monday’s edition of CTV’s Trend Line podcast.

While Nanos said it’s too early to tell how Singh’s waning support might affect the final results, he said a leader’s polling numbers usually provide an early indication of the party’s overall support.

As for why Singh’s popularity appears to be dropping, Nanos said the leader’s support has been consistent throughout the campaign and the decline has only been over the past four days, which coincides with when the English-language leaders’ debate aired on Sept. 9.

In addition to the debate, Nanos said the NDP recently revealed how they would pay for their election promises with the release of their costed platform on Saturday. According to the party’s calculations, the NDP’s platform would cost $214 billion over five years, with $166 billion in projected revenues from the Parliamentary Budget Office.

“We’ll see in a couple of nights whether perhaps people aren’t hot on that much of a deficit and that much of an increase in spending.”

In terms of support for the other party leaders, Liberal Leader Justin Trudeau continues to maintain his slight lead on the preferred prime minister front with 33 per cent support, followed by Conservative Leader Erin O’Toole with 28 per cent. The People’s Party of Canada Leader Maxime Bernier leads among the remaining parties with six per cent support, trailed by Bloc Quebecois Leader Yves-Francois Blanchet at 3.5 per cent and Green Party Leader Annamie Paul at 2.6 per cent. 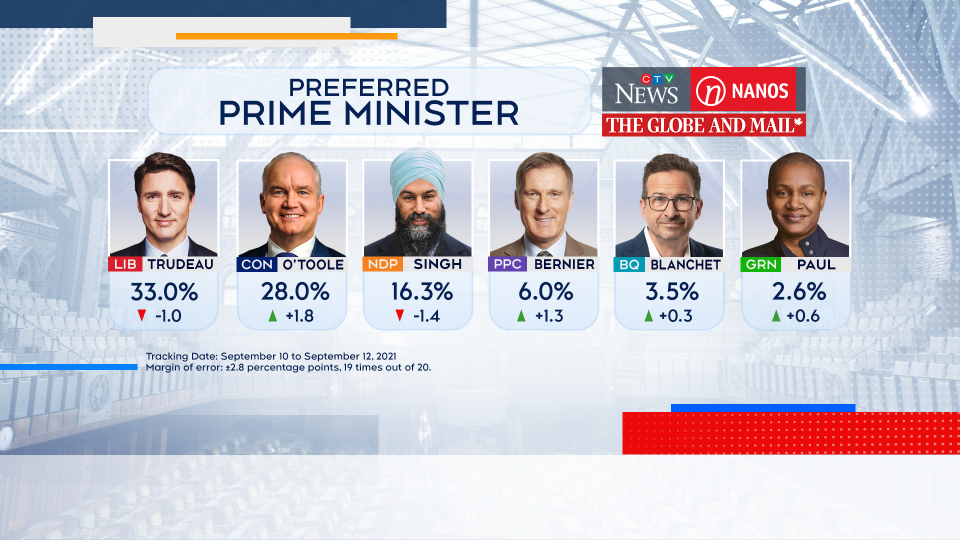 Interestingly, Nanos noted that the percentage of Canadians who are undecided in their choice for preferred prime minister has plummeted to 10.6 per cent.

“It’s the lowest that we’ve seen in the campaign and it’s quite low,” he said.

With advance polling already underway and the clock ticking, Nanos said the parties will have their work cut out for them during this final “white-knuckle week” of the campaign.

According to the nightly tracking data released on Monday, here’s how Nanos’ daily ballot tracking numbers break down:

“It’s still a statistical tie. I know it shows the Liberals numerically ahead, but it’s still very close between the Liberals and the Conservatives,” Nanos said. “[It’s] a toss up right now.”

WHAT THE LEADERS NEED TO DO IN THE HOME STRETCH

Looking ahead, Nanos said he expects Trudeau will spend the last week of the campaign answering questions about his former justice minister Jody Wilson-Raybould and the SNC-Lavalin affair after she released excerpts from her upcoming memoir over the weekend.

“I think this is going to be the issue that probably dogs Trudeau at every single event that he has,” Nanos predicted.

Additionally, Nanos said he thinks Trudeau will try to demonize the Conservatives during the final stretch in an effort to stoke fear among voters.

“The Liberals, they save the heavy fear cards to the very end,” he said.

For the Conservatives, on the other hand, Nanos said O’Toole’s strategy will likely focus on presenting a prime ministerial appearance while avoiding any mistakes and positioning himself as a change that’s not risky.

“Because the Liberal strategy will try to portray Erin O’Toole as risky change,” Nanos said.

The Singh and the NDP will have a fine line to toe this week, according to Nanos, who said the party will likely try to distinguish themselves from the other parties with their big-spending platform, but try to do so in a way that doesn’t alienate voters and risk driving them to the Liberals.

“I think in the longer term, this is a clever strategy because it suggests that if the Liberals win, or the Conservatives win, for that matter, his job will be to get more for Canadians,” Nanos said. “The problem is in the short term, will he get crushed in strategic voting as has happened in the last couple of elections?”

Blanchet, however, will likely have a more straightforward strategy for the week ahead, according to Nanos, one that’s focused on drawing support from the Liberals to the BQ in Quebec.

For Paul and the Green Party, Nanos said a best-case scenario for them would be to hold on to their two seats in British Columbia and for Paul to win her riding in Toronto and then go through the process of rebuilding and healing the party after all of the divisions they’ve experienced.

Finally, Nanos said Bernier’s support is surprisingly high at 6 per cent considering he was left out of the two official leaders’ debates last week.

“The big question is will that be a spoiler for the Conservatives?” Nanos said. “Bernier is still a factor. Can he deliver on those polling numbers? We’ll see how well organized and how motivated those People’s Party of Canada supporters are.”

A national random telephone survey (land- and cellular-line sample using live agents) of 1,200 Canadians is conducted by Nanos Research throughout the campaign over a three-day period. Each evening a new group of 400 eligible voters are interviewed. The daily tracking figures are based on a three-day rolling sample comprising 1,200 interviews. To update the tracking a new day of interviewing is added and the oldest day dropped. The margin of error for a survey of 1,200 respondents is ± 2.8 percentage points, 19 times out of 20.

The respondent sample is stratified geographically and by gender. The data may be weighted by age according to data from the 2016 Canadian Census administered by Statistics Canada. Percentages reported may not add up to 100 due to rounding.