Independent Member of Parliament Kevin Vuong says he regrets not being transparent about a past sexual assault charge and is apologizing after the allegation surfaced just days before the federal election.

In an exclusive with NEWSTALK 1010’s Moore in the Morning, Vuong broke his silence on the matter after winning in Toronto’s Spadina-Fort York riding in September’s federal election.

“I erred in judgment and I made the wrong decision, and I let people down. And I deeply regret that and I really want to apologize,” Vuong told host John Moore from his constituency office in Toronto on Wednesday.

Just days before the election, The Toronto Star released a report about a previous sexual assault charge laid against Vuong in 2019.

The paper reported that the charge was later withdrawn by the Crown.

Shortly after hearing about the allegation, the Liberals asked Vuong to “pause his campaign” and later said Vuong would not be a member of the Liberal caucus if he were to be elected.

However, thousands of people had already voted by mail or in advance polls in the riding and the Liberals said it was too late to remove his party affiliation from the ballot. 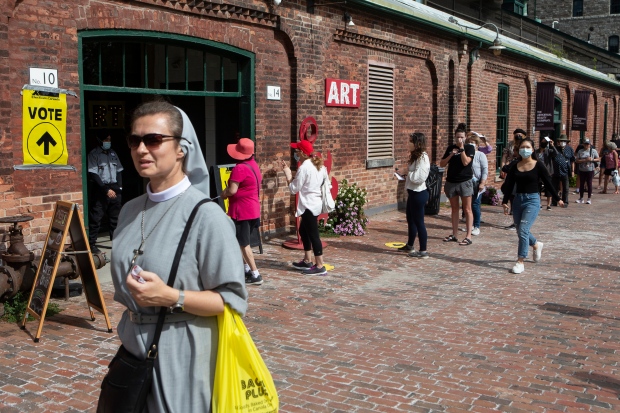 Vuong, who is an officer in the naval reserves and a business owner, denied the allegations.

When asked about the charge on Wednesday, Vuong did not disclose more details.

“I’m not here to fight a previous allegation. What I’m here to do is, you know, as part of this dedicated forum to be able to provide context around what happened,” he added.

The Liberals said that they had no knowledge of the charge at the time of his nomination and vowed to improve the candidate vetting process in the future.

Vuong said he found out about his removal from the party when the general public did, and that he doesn’t blame the party for that decision.

“To be honest, I think the exact timing is a little fuzzy in my mind. When I found out when everyone else did I think it was shortly followed by an email kind of closing the loop on that.”

When asked if he would want to be a part of the Liberals in the future, Vuong didn’t answer and said he is focused on serving his riding right now.

Vuong managed to win the riding with about 39 per cent of the vote, beating out his main competitor NDP candidate Norm di Pasquale.

Despite sustained calls for Vuong to resign, including from his predecessor Adam Vaughan, he released a statement days after his victory saying he planned to continue as an independent member of parliament.

Vuong told NEWSTALK 1010 that he regrets not being transparent about the allegation.

Vuong said he “made the wrong call” about hiding the charge and was acting “naive.”

“I made the wrong call. I made a tremendous error in judgment in not disclosing, right, and again, I want to apologize for that. It’s why I am now an independent member of parliament.”

Although many have raised concerns about Vuong’s win, he said he is committed to serving the riding and has already resolved hundreds of issues brought to his office.

“The fact is of the 610 files that we’ve had for about a month and a bit we’ve already resolved two thirds of them, 399 are done. There are 211 outstanding files that we’re actively working on and the independent civil service doesn’t care that I’m independent or if you come from another party,” he said.

Vuong said he is willing to answer questions from constituents but is asking the public to not approach his family and friends.

“One of the things that I do ask is that, you know, people stop accosting my partner, you know, when she was walking our dog, please leave her alone. My friends, my family, my shipmates, my former co-workers, please leave them alone.”

Voung has been officially sworn in as an MP and said he has hired staff in Toronto and is looking to hire employees for his office in Ottawa.

He said he currently has no relationship with the Liberal Party or the Prime Minister’s Office.

-With files from The Canadian Press.

Five things to watch for in Canadian business – Toronto.com