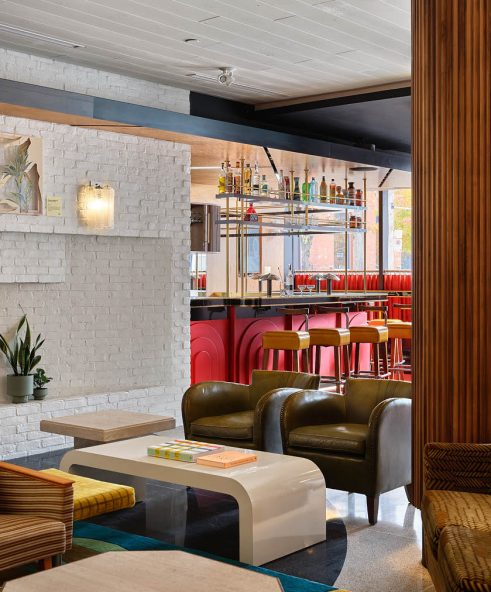 The Drake has become as emblematic of Toronto as well, Drake himself. Though, for the record, the hotel preceded the rapper, opening its doors in 2004, back when Aubrey Graham was still gracing our screens on Degrassi.

Since then, there’s been the Drake General Store, the Drake One Fifty, the Drake Devonshire, the Drake Motor Inn and the late great Drake Commissary. Now comes a new chapter in the Drake epic: a sparkling expansion of the original property that more than doubles its scope.

Dubbed the “Modern Wing,” the sleek structure soars five-storeys high and counts 32 guest rooms, including a steel-clad cantilevered rooftop suite. It stands in contrast to the “Classic Wing,” the ornate 19th-century building that once housed the entire hotel. A swish lounge and rooftop patio bridge the past and present.

I spin through the stately revolving door on a recent visit. It’s been more than a year since I’ve left the city to move back to my hometown of Montreal. How I’ve missed it. The way it buzzes and bustles and begs you to match its energy. Standing here, in the heart of Queen West, in the Drake’s brand new lobby, I can practically feel the city coursing through me. This is the Toronto jolt I’ve so been craving.

But more on that lobby. Like all things Drake, it is an exercise in cool. There’s a groovy ’70s-style couch, travertine coffee tables and several pairs of mid-century modern club chairs. Everything’s set against a swirl-emblazoned rug in a riot of jewel tones and the most expertly curated playlist.

I highly recommend settling in by the fire and sipping one of the lobby bar’s exquisite cocktails—all starring local spirits. (A word of advice: Do not skip the snacks. Pecorino-sprinkled truffle fries, anyone?) The whole place has the kind of slinky atmosphere that makes married couples flirt like they’ve just met or prompts groups of girlfriends to ponder buying a pack of smokes for old times’ sake. Just fun, fun, fun.

And this being The Drake, that fun extends to every last corner of the guest rooms, right down to the very cute stuffed toy on every bed. The decor is plush yet unpretentious: boldly patterned wallpaper, velvet headboards and terrazzo walk-in showers.

It’s swanky to be sure, complete with Frette linens and Malin + Goetz toiletries, but it’s not all show. Every last detail is about meaningful design, from the handcrafted sconces to the original artworks (handy labels provide background on every piece and artist). Special attention is also paid to sustainability. There is a recycling bin in every room and those aforementioned toiletries are in large refillable pumps rather than wasteful tiny bottles.

I slip on one of The Drake’s custom sweatshirt robes and sink into a heavenly slumber. The next morning, I wake up smiling, happy to be in a city so dear to me. I could stay in that cushy robe a bit longer and order room service, but something even better awaits me downstairs: a breakfast date with an old friend and her brand new baby.

We sit down in the sun-filled dining space, the wall of windows serving up a postcard view of Queen Street West. We both order the sweet potato and kale hash—the chorizo gives it a lovely kick and the sunny-side egg brings it all together—and fill each other in on all that’s happened in the past year and a half: babies and engagements and parents getting older. I wish I could stay in this moment forever.

Alas, my train awaits. With my Uber driver on his way, I stand in that fabulous lobby one last time, soaking in the magic of the city, the magic of The Drake. I pull out my phone and text my fiancé: “We must come back here together!”

Until next time, Drake.

This article contains affiliate links, which means The Kit may earn a small commission if a reader clicks through and makes a purchase. All our journalism is independent and is in no way influenced by advertising. By clicking on an affiliate link, you accept that third-party cookies will be set. More information.