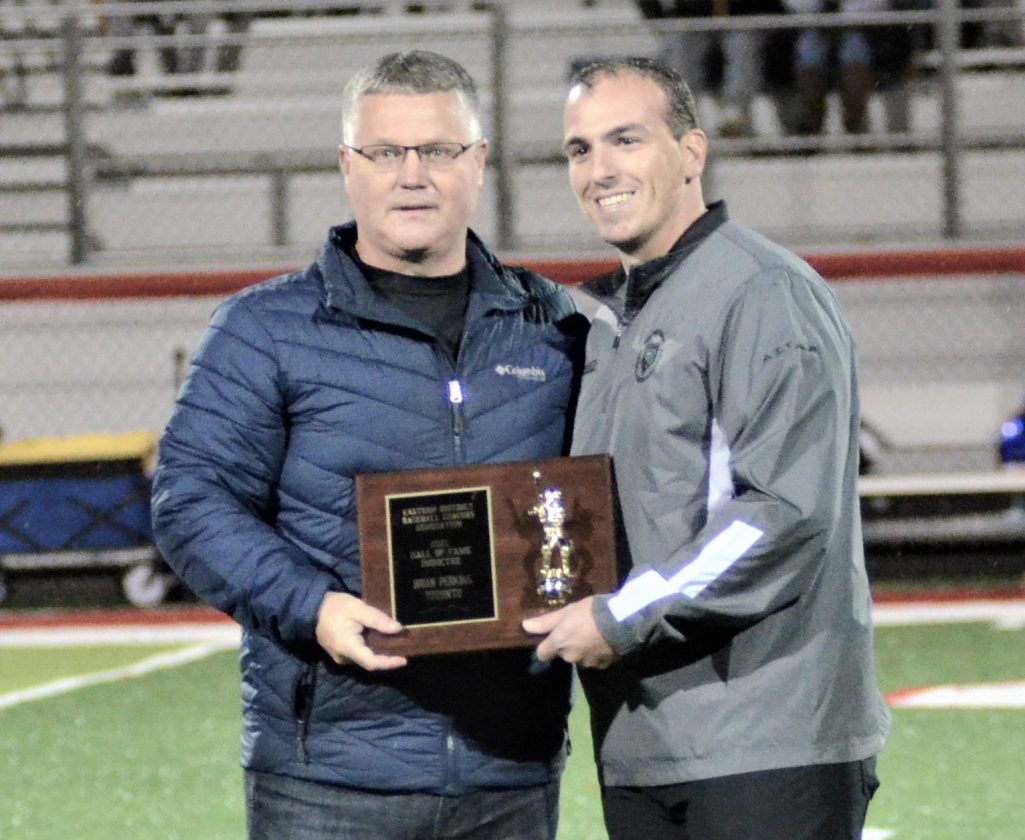 Andrew Grimm HALL OF FAMER — Toronto head baseball coach Brian Perkins was presented with a plaque recognizing his recent induction into the East District Hall of Fame by East District State Representative and Harrison Central head baseball coach Mike Valekso between the first and second quarters of Friday’s Toronto football game against Catholic Central. Perkins has been coaching baseball for 28 years, the last 17 of which as the Red Knights head coach.

TORONTO — For Brian Perkins, being Toronto’s baseball coach has been a dream come true in itself.

Everything that has come with it — being part of nearly three decades of success, a long list of accolades and a couple state championship rings — have all been the cherry on top of fulfilling that dream.

Recently, that list of accolades grew, as Perkins was inducted into the East District Baseball Coaches Hall of Fame.

“Anytime you get recognition from your peers at the baseball level, it is exciting,” Perkins said.

“It always means a little more to get the recognition from your peers.

“My life’s dream has been played out as a baseball coach at Toronto City Schools.”

During the break between the first and second quarters of Friday’s Toronto football game against Catholic Central at Clarke Hinkle Stadium, Perkins was presented with a plaque to commemorate the occasion by one of those peers, East District State Representative and Harrison Central head baseball coach Mike Valesko.

“Coach Valesko is a good friend of mine and we have known each other for a lot of years,” Perkins said. “The fact that he is the state rep for the East District to the board and was able to be there to present it is a little extra special.”

His teams have been incredibly successful, winning the 2019 Division IV State Championship, six poll championships, a record 26-straight sectional titles (a streak that started when he was an assistant), eight district titles and two regional titles.

He was also the third base coach of the 1998 state championship Toronto team. He’s also served on the State Baseball Coaches Association and OVAC Boards.

His overall record as head coach of the Red Knights the last 17 years is 352-90, his 352 wins being the most in school history as well.

“I’ve been blessed to have a lot of great support, a lot of great, dedicated coaches and an administration that has always been supportive and backed the baseball program and anything we’ve ever needed,” Perkins said. “The community of Toronto is a big baseball town.

“It goes without saying that I wouldn’t be where I am without the players we’ve had throughout the years. We have had a lot of great players come through the program and I have been fortunate to coach them and maintain good relationships with them outside the game of baseball.

“I want to thank my family for all their support. Without a wife and kids that understand the time that is put in and making sacrifices over the years, I wouldn’t be able to put in the time that the program deserves.”

With a new turf field and having seen the upgrades to the facilities over the years, there seem to be a lot more wins and accomplishments to look forward to this spring and beyond.

“I’ve always said that, as long as I’m enjoying what I’m doing, I’m going to continue to do it as long as they’ll have me,” Perkins said.