Toronto Pearson International Airport has shown signs of improvements in recent weeks, but a traveller and aviation expert says he was disheartened to see “mountains” of bags and triple stacked security lines at the airport over the weekend.

“What this is telling us is the information that Transport Canada has been touting about how much better things are getting, things are not getting better,” Robert Kokonis, president of AirTrav, a global aviation consulting firm, told CTV News Toronto. 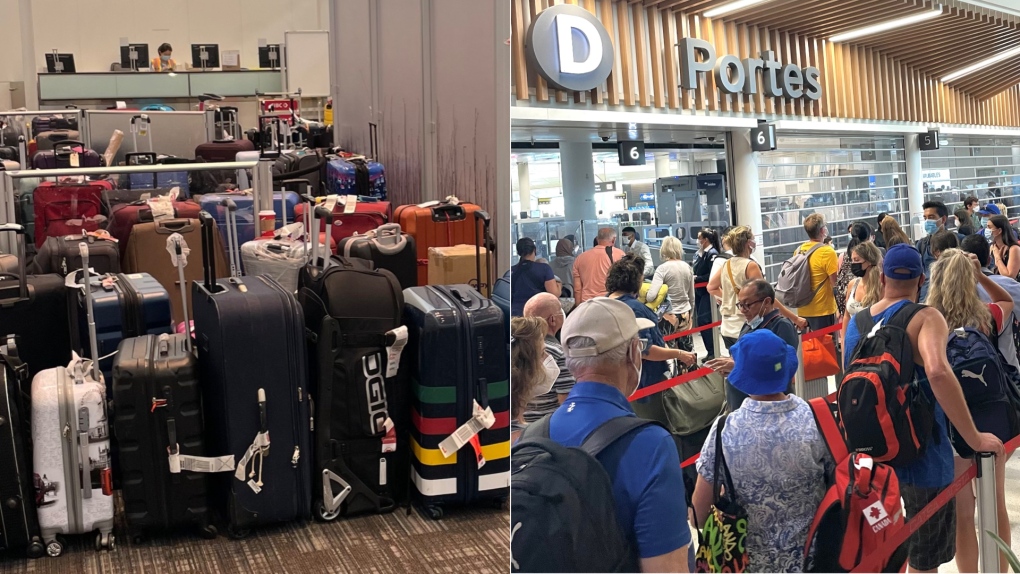 On Sunday night, Kokonis said, he flew from Halifax to Toronto. When he arrived at Terminal 1’s baggage claim, he saw hundreds of bags, strollers and walkers lining the floor. He also took a look at the domestic security line, which he said was 70 metres long.

“To see security line-ups of that length and those piles of baggage was really disheartening,” he said.

This follows a stream of positive news recently associated with the travel hub. Last week, the federal government said that the number of planes held on the tarmac at Pearson has “decreased dramatically” since early May.

A few weeks earlier, the president of the Greater Toronto Airports Authority (GTAA), which oversees operations at Pearson, announced that the travel hub had seen “measurable” operational improvements in recent weeks.

However, Kokonis said it was clear to him while he was at the airport that the chronic issues this summer have not been resolved.

1/ Pearson #YYZ T1: not a peak domestic arrival flow at 5:50pm. Continued mountains of bags in the arrivals hall. The scores of baby strollers & car seats that either did not accompany the travelers to destination, or back home, was striking. Again, this was domestic, not intl. pic.twitter.com/HWD4iLTPCl

“Here we are now, only about 20 days away from the end of the summer peak and clearly these issues have not been solved,” he said.

GTAA spokesperson Tori Gass said that airlines are responsible for delivering bags to passengers – not the airport. CTV News Toronto reached out to Air Canada for a response.

“We did not experience any issues with the baggage system yesterday evening,” Gass said.

While mountains of bags and lengthy security lines have come to symbolize travel headaches this summer, Kokonis said that these issues merely display a “ripple effect.”

He pointed to ArriveCan app glitches and the need to update technology at security to eliminate the need for travellers to remove electronics from their bags as just a couple of examples of urgently needed improvements.

“The bottom line is this, we are doing damage to the Canadian tourism brand.”

Business groups in Moncton demanded a stronger response by municipalities, the province and federal government to crime and homelessness they say threaten